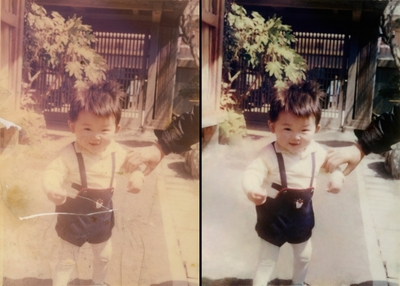 When photo retoucher Becci Manson went to Japan to help with tsunami relief, she wasn't expecting to use her professional skills. But, like Deborah Rodriguez of the famous Kabul Beauty School

(discussed in The Substance of Style), she discovered that people in dire straits often want more than food, shelter, and clothing. In this case, they wanted their old photos saved. From an article telling her story on the Creativity website:

Originally, she was slated to be in Tohoku for three weeks, helping with evacuations, food, shelter and clothing. But people were bringing in cameras and photographs they found among the piles and piles of debris everywhere. So Manson started to hand-clean them.

When Manson realized how much there was to be done, she got on Facebook and asked if there was anybody who might want to help. "Overnight, there was tons of enthusiasm," she said. "I really realized then what we could do."

In June, Manson returned to the U.S., grabbed some equipment, made a few more contacts, and went back to Japan, deciding that she would stay until All Hands had to pack up and leave.