In its June design issue, Fast Company put Procter & Gamble CEO A.G. Lafley on the cover and ran an interview about the company's design-oriented strategy. (As part of this emphasis, spearheaded by VP Claudia Kotchka, last year P&G hired me to spend a day giving speeches on The Substance of Style, first to designers and then to the company's top 300 executives.) P&G's initiative is an extraordinary turn for a company whose traditional emphasis has been on technology-driven functional improvements, backed by mass marketing and advertising. The emotional response to a product or its packaging didn't figure in the old P&G equation. Even function could be defined fairly narrowly--how well a shampoo cleans, for instance, but not how it makes your hair smell. Lafley aims to change that. As he told Fast Company:

"We have to create a great experience every time you touch the brand, and the design is a really big part of creating the experience and the emotion. We try to make [a customer's experience] better, but better in her terms. If you stay focused on experiences, I think you will have a lower risk of designing something that may measure well in a lab but may not do well with the consumer."

Here's how that resolve plays out in a new product. The bottle for Crest Pro-Health Rinse is so appealing that Steve and I almost bought some, even though we never use mouthwash. It looks especially good compared to the nearby Listerine, which even in its friendly blue form "looks industrial, like Janitor in a Drum," says Professor Postrel.

To supplement the glamour shot, I'm including some on-the-scene photos from Walgreen's. My photos don't capture the full emotional impact of the design, in part because the mind's eye screens out a lot of the ugliness of drugstore shelves. (In the bottom photo, check out the pegboard background and the adult diaper packaging creeping over from the adjacent aisle.) The next frontier for consumer-products designer is doing something about the hideous store environments in which their products appear. 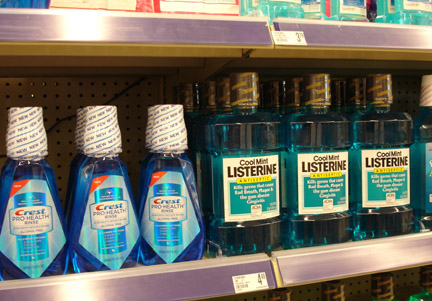 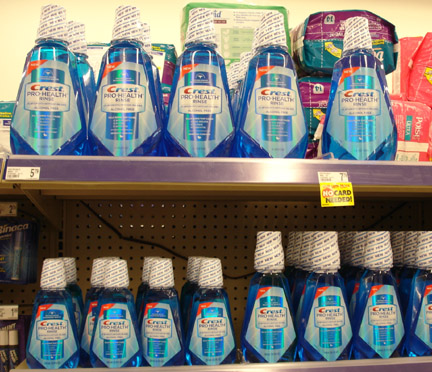