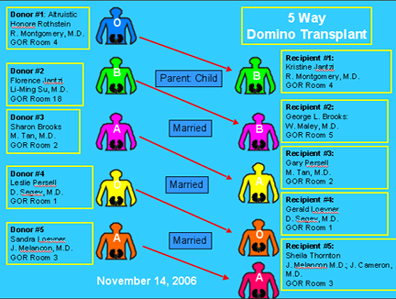 In an impressive display of surgical and organizational skill, the transplant center at Johns Hopkins has performed a "domino donor" transplant involving ten different people--five kidney donors and five recipients. Frank D. Roylance of the Baltimore Sun explains the details:

Last Tuesday's surgeries at Hopkins began when four kidney patients went to Hopkins, each with a willing, but medically incompatible parent or spouse.

It was [Honore "Honey"] Rothstein who started the dominos falling in a scheme that allowed all four patients, and a fifth who had been waiting years for a new kidney to get their new organs.

After Rothstein's first husband, Barry Castleman, died at 48 of a brain hemorrhage, all of his organs were donated. Amid their grief, Rothstein said, she and her children derived "great joy" from the notes they received from the recipients. "In a moment of desperation, you look for something good," she said.

When her daughter, Summer Castleman, 24, subsequently died of a drug overdose, none of her organs could be shared. So Rothstein offered her kidney in honor of Summer, whose framed photograph she clutched yesterday.

Her kidney went to Jantzi, whose mother, Florence Jantzi, a 65-year-old missionary from Ontario, donated a kidney to George Lonnie Brooks, 52, a semiretired mechanic from Clermont, Fla.

(When Brooks excused himself from the news conference yesterday to visit the men's room, Montgomery smiled like a proud father. "It's working," he said. "It's a beautiful thing.")

Imprssive though it may be, John Heaney at Organomics finds this complex barter scheme maddening: "The story illustrates the exceptional capabilities of the American healthcare system, the ingenuity and operational expertise of the Hopkins medical staff, the selflessness of five kidney donors, and the mindless stupidity of the current transplant rules that compelled the Hopkins staff to coordinate a five-ring circus in order to save five patients' lives."

I agree, but you have to start somewhere. Crazy as it was, the 10-person swap not only saved five lives but also challenged the policy status quo. As surgeon Robert Montgomery explained at a press conference and in a further statement on the Johns Hopkins website, "Under current federal law, organs cannot be donated with the expectation that the donor will receive consideration or payment. Donors who are involved in KPD transplants make their donations with the expectation that a specific person, usually a loved one, will then receive a compatible organ from a different donor. It is feared that this expectation could be considered a form of recompense for donation, thus running afoul of the law. This provision in the current law should be clarified to encourage these important, life-saving operations on a broader scale." Even the National Kidney Foundation, sworn enemy of incentives for donors, should be able to support that reform.

Posted by Virginia Postrel on November 21, 2006