All this week on DeepGlamour.net we're featuring excerpts from Stephen G. Bloom's new book, Tears of Mermaids: The Secret Story of Pearls

, which uses a tour of the pearl industry as a microcosm of the global economy. Here's today's post:

In Tears of Mermaids: The Secret Story of Pearls

, Stephen G. Bloom (interviewed yesterday) provides a behind-the-scenes tour of the worldwide pearl industry. Here is the first of four installments on the Chinese freshwater pearl farms that are transforming the world of pearls. 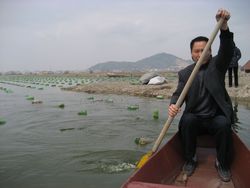 Zhuji (pronounced SHOE-ghee), about 100 miles southwest of Shanghai in the province of Zhejiang, is the epicenter of the world's freshwater pearl market. These are cultivated pearls that don't come from oysters, but instead from large, oval-shaped mussels. China produces 99 percent of all such freshwater pearls in the world. Zhejiang province is dotted with thousands of small, family-operated pearl farms, most of them state cooperatives. Such farms are seemingly everywhere, with millions of green plastic pop bottles bobbing up and down on the surfaces of thousands of small artificial lakes, each bottle signifying another crop of fresh mussels, and each mussel containing as many as fifty pearls inside. Exactly how the Chinese have been able to cultivate mussels that produce so many pearls remains something of a mystery. These pearls don't develop around an inserted nucleus, as their counterparts in oysters do, but instead grow from multiple tiny squares of mussel mantle tissue inserted into each host mussel.

The first crop of Chinese freshwater pearls appeared in the early 1970s, and since then, pearl exports from Hyriopsis cumingii mussels have grown exponentially. At first, the pearls were miniscule. By the 1980s, their size had grown and they started coming in a variety of striking rainbow colors. These pearls were often labeled and sold as Lake Biwa or Lake Kasumigaura pearls from Japan, fetching higher prices because of the Japanese label. 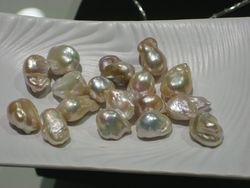 The Chinese freshwaters were a breakthrough in the fashion marketplace. Fashion-conscious women around the world started wearing pearls that weren't just white or cream-colored, and not always round. Stylish younger women gravitated to them. These pearls had four things going for them: they were colorful, they often weren't symmetrical (the baroque shapes appealed to non-traditional pearl wearers), they had the legitimacy of being real pearls, and they were downright cheap when compared to traditional pearls. As their size got larger, the Chinese freshwaters readily turned into trendy fashion items, turning into accessories fashion-forward women in their twenties and thirties from Paris to São Paulo just had to have. It didn't hurt that women like Meryl Streep, Jennifer Aniston, and eventually Michelle Obama started wearing them, too.

As Chinese technology got better, more and more freshwater pearls came on the global market at a fraction of the price of their international counterparts. By the late 1990s, the best of the Chinese freshwaters were virtually undetectable from increasingly scarce Japanese akoyas, and soon, the Chinese pearls were available in even larger sizes than the Japanese species would allow. Symmetrical freshwater Chinese pearls now come as large as 14 millimeters (that's as big as a marble), and are getting larger. Their skin can be flawless and comes in a multitude of colors (pink, blue, violet, orange, gold, gray), some right out of the shell, others the result of dye, chemical, and radiation treatments.

The flooding of so many Chinese pearls into the world market presented a problem for producers of more expensive pearls (just about every producer outside China). It'd be akin to the De Beers diamond syndicate discovering a competitor had come up with a new process that could create a genuine diamond, not a zirconium knockoff, but a real diamond that cost pennies to the thousands De Beers diamonds fetch. No wonder the worldwide pearl industry started screaming. 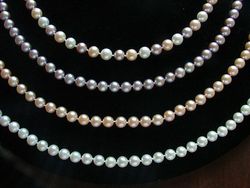 Example: A strand of medium-sized, near-perfect Chinese freshwater pearls can be bought wholesale today for under $150. Such reverse sticker shock is freaking out just about every other national producer of pearls. To make matter worse, to most consumers, such a strand is virtually identical to strands that sell for five and ten times as much (and sometimes more). Chinese freshwaters are showing up everywhere, from top-end retail jewelry boutiques like Mikimoto, Bulgari, Harry Winston, and Van Cleef & Arpel's to low-end merchandizing giants, such as Wal-Mart, JC Penney, Jeremy Shepherd's Internet sites, and cable TV's QVC. Their price-point is so low and their quality can be so high, that it's no surprise that some dealers intentionally mislabel Chinese strands as of a more expensive provenance (Japanese, Tahitian, even Australian). This can be by unscrupulous intention, but it's often just an uninformed mistake. Chinese pearls can look so good they fool wholesalers and retailers alike.

Inexpensive high-quality Chinese pearls are out there, and out there in a big way, and because of their proliferation, the global pearl industry is undergoing the same cataclysmic changes it faced in the 1930s, when Japanese cultured pearls were introduced to world markets. The rapid abundance of cultured pearls devastated and soon destroyed the natural-pearl market. Some dealers say today that the same could happen with Chinese freshwater pearls, ultimately replacing their much more expensive seawater counterparts from around the world. I wanted to see how the Chinese were going to make this happen.

Next installment here: Zhuji and visiting a pearl farm