The Real Reason That Ann Taylor Hates Plus Sizes

It has nothing to do with fat phobia.

The malls are empty, and retailers are crying for customers. American women are getting heavier by the day. Yet stores like Ann Taylor and Bloomingdale’s, and lines including Liz Claiborne and Ellen Tracy, are slashing their plus-size offerings—turning away potential sales and generating angry denunciations of “sizeism.”

“I will stop buying at Ann Taylor for anything,” declared commenter Savona in response to this Crain’s New York Business report on the retailer’s decision to eliminate size 16 from its stores, offering the size only online. “If they will not accommodate those who are willing to buy,” she continued, “then they don’t deserve our business for anything else—shoes, accessories, eyewear.” Commenter Patricia vowed, “I will no longer shop at Ann Taylor until they cut the size 0 and size 2’s.”

Cutting back on larger sizes—or not offering them in the first place—is not only insulting, many people believe; it’s bad business. After all, the Centers for Disease Control and Prevention reports, in 2002 the average American woman weighed 164 pounds—nearly what the average man weighed in 1960. Why aren’t retailers serving this growing market? Are they just mean-girl fashionistas?

A moment’s reflection suggests there must be another explanation. Few industries are more fiercely competitive than apparel. If there were money to be made by adding a few more sizes to the racks, surely someone would do so. Vogue can afford to traffic in fantasy. Ann Taylor and Liz Claiborne can’t.

Cost is also a factor. Because they require more fabric, larger sizes are more expensive to manufacture. “The cost of clothing is disproportionately in the materials and not the labor, due to the shift in production to low-wage countries, which means that it is going to be more expensive to produce clothing for large-sized women, and more resources will be tied up in garments on the racks,” notes Susan Ashdown, a professor in the Department of Fiber Science & Apparel Design at Cornell and a leading researcher on improving apparel fit. Imagine the fury that would greet prices that went up with dress size.

Spend any time with Ashdown and you learn not to trust averages—like that much-cited 164 pounds—to tell you anything about clothing sizes. “The average takes you to nobody,” she explained a couple of years ago, when I was researching this piece on why it’s so hard to find jeans that fit. Even people with the same height and weight vary along many different dimensions. “You want methods of identifying groups of people so you can fit a whole group of people with one garment.”

That challenge is always hard, but it becomes much more difficult with larger sizes. Plus sizes create a fundamental problem for manufacturers and retailers—a problem that takes statistical analysis, rather than ideology and emotion, to understand. Consider a simple example, a group of five average-height women who weigh 120, 130, 140, 200, and 240 pounds. Their average weight is 166, about the U.S. average. But a size created around that average would fit no one in the group.

The actual population doesn’t look exactly like this example, but neither does it resemble a normal bell curve with 164 pounds as the mean. Take a look at these two graphs, provided by David Bruner, vice president for technology development at [TC]2, an apparel-industry consortium that has collected body-scanner data from 6,800 women representing a cross-section of the U.S. population. The first, a neat bell curve, represents the distribution of heights. 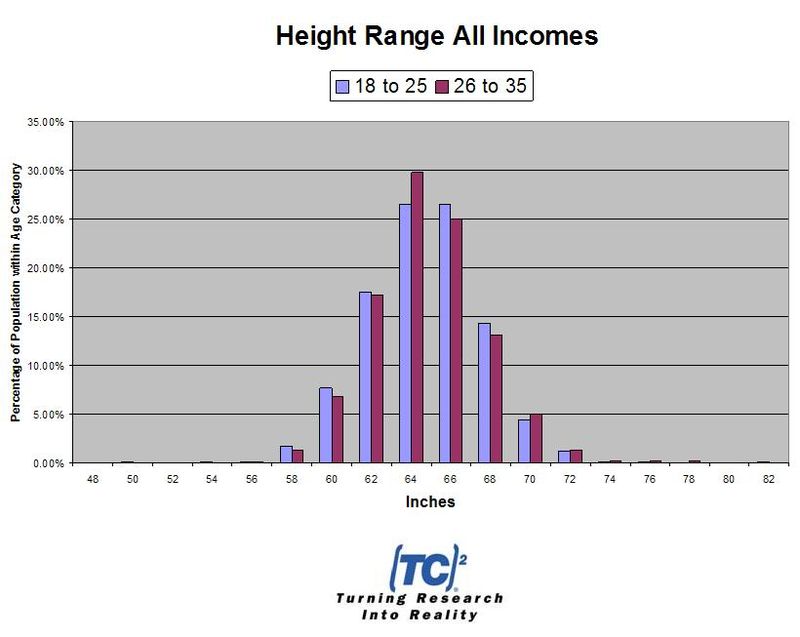 The most common weight—130 pounds for women under 25 and 140 pounds for those 26 to 35—is well below the average, which is raised by all those women spread out in the distribution’s fat upper tail on the right. (The distribution looks similar for other age groups, though the specifics differ.) There really are a lot of larger women, but “larger” covers a lot of different weights. The individual bars get smaller at higher weights. But, unlike the upper end of the height graph, they don’t quickly dwindle out of sight. The total number of women who weigh more than 200 pounds is much greater than the number of women who weigh 110 or 120 pounds, while the number of women at a specific weight—200 versus 250, for instance—is generally fewer. 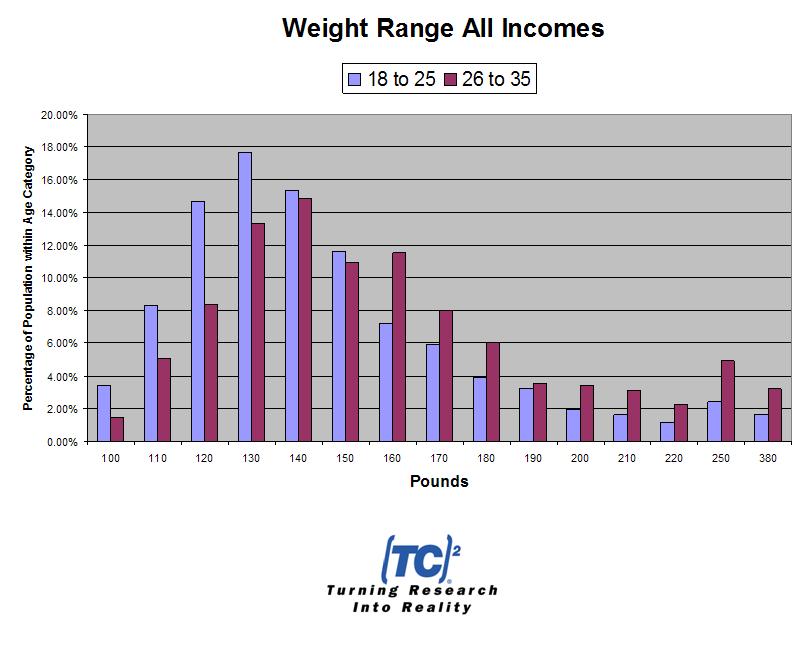 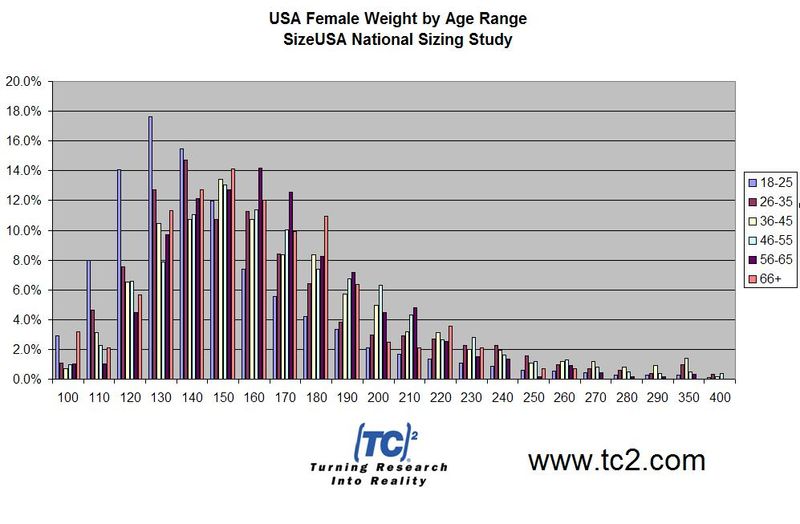 Translated into clothes, that means a lot of different sizes. “It’s not that everybody’s 20 pounds above average,” explains Bruner. “You can’t make something for somebody who’s 200 and expect it to fit somebody who’s 240.” At the upper weights, each new size covers relatively few people. Adding size 16 may make women who wear size 18, 20, or 22 feel a little better, but it won’t get them to buy your clothes.

The statistics also explain why plus-size clothes tend to be less tailored, even though larger women often look more attractive in body-skimming clothes. “You’ll generally see things less styled so each size can fit a slightly larger range of person, and you’ll see more stretch,” says Bruner. Designed to cover a wide range of bodies, a size 22 is thus more like a “medium” than a 10.

None of this analysis makes shopping for large clothes any easier, of course. But it suggests that the trend toward putting bigger sizes online, thus pooling shoppers from all over and turning niche sizes into large markets, makes sense. It isn’t an insult or judgment of personal worth. It’s a practical way to give women with relatively uncommon bodies clothes that might actually fit.

Virginia Postrel is a columnist for Bloomberg Opinion and the author of The Fabric of Civilization: How Textiles Made the World. Her previous books include The Power of Glamour, The Substance of Style, and The Future and Its Enemies. Follow her on Instagram @vpostrel, subscribe to her YouTube channel, "like" her on Facebook, and join her email list here.