'Katharine Hepburn: Dressed For Stage And Screen' At The NYPL

With this post, we introduce our newest DG contributor, Jessica Barber. (If the post's formatting looks odd, please adjust the width of your browser window. TypePad can produce some odd effects with photo placement, and they aren't Jessica's fault.)--vp

Last month I had the great pleasure of patronizing the beautifully curated costume exhibition Katharine Hepburn: Dressed for Stage and Screen, in a seemingly unlikely venue for such a topic: the New York Public Library. The exhibition was organized by the Kent State University Museum, which was given 700 items from Hepburn's estate several years after her passing in 2003 at the age of 96. (The museum is renowned for its extensive costume collection, which contains more than 40,000 objects.) In collaboration with the NYPL, the exhibition included not only many of the costumes from the actress's long career in stage, film, and television, but also examples of the casual everyday wardrobe that helped solidify her as an icon of “rebel chic.”

The fashion and costume designers represented in the exhibition were a veritable who’s who of Hollywood names: Valentina, Howard Greer, Muriel King, Irene, and Cecil Beaton, to name a few. Exhibited alongside garments and accessories were other film and stage ephemera such as posters, playbills, lobby cards, and even a makeup kit used by Hepburn, with various brushes, lipsticks, and Max Factor concealor still inside. 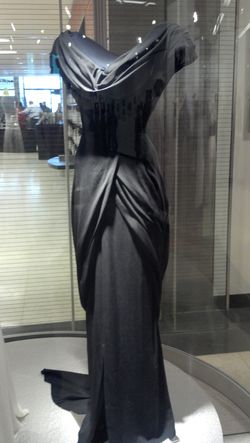 Black silk evening gown by Walter Plunkett, worn by Hepburn as Amanda Bonner in 'Adam's Rib' [MGM, 1949]; Kent State University Museum, KSUM 2010.12.4, Gift of the Estate of Katharine Hepburn. Designed to accent her 20" waist, this gown was colored red by the MGM publicity department for the lobby card, right. 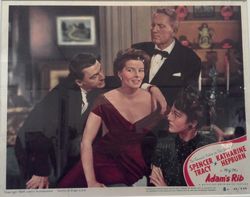 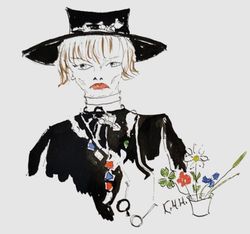 One of the most important points the exhibition illustrated was Hepburn's high level of involvement in crafting her characters' wardrobes. More than many of her contemporaries, Hepburn was acutely aware of the importance of dress not only to the characters she portrayed but to the overall storyline as well. She worked closely with the designers of her film and stage ensembles (famed costume designer Edith Head once remarked that one "did not design for her," but "with her") and she even made sketches of her own costume designs. The muticolored pastel silk organza gown by Valentina that she wore as Jamie Coe Rowan in the 1942 film Without Love was one of many dresses that Hepburn personally sketched, noting details of the fabric choice, the construction, and how the skirt "simply floated."

Hepburn was also known to sketch self-portraits of herself as the characters she played. These captured the qualities she wanted to convey with each. Among the sketches included in the exhibition was her watercolor self-rendering as Gabrielle "Coco" Chanel, whom she played in the stage musical Coco (1969). Chanel was a hardworking couturière who was known for her stern personality, and this trait is skillfully conveyed by Hepburn's characterization. 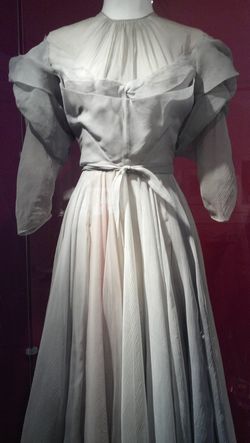 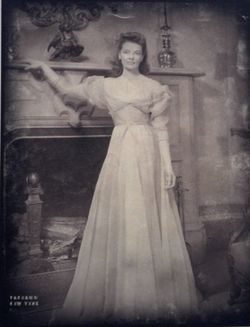 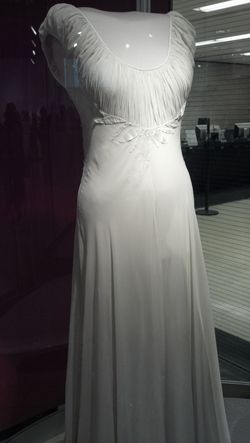 Cream silk georgette and crêpe de Chine nightgown by Irene, Kent State University Museum, KSUM A2010.12.3, Gift of the Estate of Katharine Hepburn.
Also of particular note was how meticulously well-crafted and in rather good condition many of these garments were, such as this shirred and appliquéd cream silk georgette and crêpe de Chine nightgown designed by Irene and worn by Hepburn as Mary Matthews in State of the Union (MGM, 1948). As any designer for the stage or screen will tell you, this is not always the case. Between the forgiving eye of the camera (or the forgiving distance of the audience from the stage) and the many retakes and rehearsals, the film and theatre costumes in museum collections are notorious for their shabbiness. But even from behind a wall of Plexiglas, it was clear that much care had been put into their detailed construction. This is no doubt also a reflection of how involved Hepburn was in the process of designing and creating them, and of the high standard to which she worked. As the exhibition text noted, she often had recreations of her costumes made for her everyday wardrobe, so it is no surprise that they were made to stand the test of time. 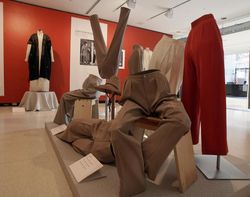 Slacks and jodhpurs worn by Katharine Hepburn at the NYPL. Image credit: The Associated Press.
Of course no clothing exhibition of Katharine Hepburn's would be complete without at least a passing mention of her well-known preference for trousers in her everyday life. The exhibition included many pairs of slacks and jodhpurs skillfully installed on half-mannequins in poses that playfully evoked her unabashed preference for this masculine style, when it was still unheard of for women to express such sartorial sentiments.

With four Academy Awards for Best Actress (and eight additional Oscar nominations), Katharine Hepburn remains the most decorated actress in American film history. Even ten years after her passing, she continues to charm the public with her style, wit, and enduring performances. As noted in the exhibition brochure, perhaps Calvin Klein summed up Hepburn’s mass appeal best when he presented her with the CFDA’s Lifetime Achievement Award in 1985: “She has truly epitomized the ultimate American woman. She’s vibrant, she’s outspoken, she’s hardworking and she’s independent…and, fortunately for all of us, she’s never been afraid to be comfortable.”

(Note: The exhibition opened to the public in October 2012, and three months is the generally accepted upper limit on exhibitions featuring costumes and textiles because of their fragility, so the exhibition closed in January 2013. But, you can still download a PDF copy of the handsomely illustrated exhibition brochure here).