Boots Were Made For Talking, About Who We Are 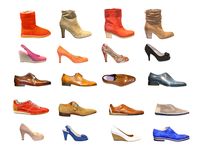 Thanks to everybody who answered my shoe survey. It played a small role in my latest Bloomberg View column.

If you have been reading newspapers or websites, listening to the radio or watching TV over the past few weeks, you have probably heard the news: “You CAN judge a person by his shoes.” Beginning in mid-June, word of a psychology article titled “Shoes as a source of first impressions” began circling the globe.

Describing an experiment by researchers from the University of Kansas and Wellesley College, many reports declared that shoes alone reveal just everything about the wearer’s personality. “Overly aggressive people wear ankle boots,” proclaimed a Los Angeles National Public Radio host.

What psychologist Omri Gillath and his team actually found was more modest. Without the cues of facial expressions and context, college students could guess basic demographic characteristics from looking at photos of other college students’ footwear: gender, age and income. They could also detect the personality trait known as agreeableness, as well as something called attachment anxiety, which is connected to fear of rejection and was correlated with dull-colored shoes. That was all: not political affiliation, not how extroverted the wearers were, not whether they were overly aggressive.

The study made a solid contribution to research on first impressions, but it was hardly earthshaking. By getting so much attention, however, it demonstrated a sociological truth: People love to talk about shoes. Even those who dismissed the research as silly often felt compelled to call radio stations or comment on websites, providing details about their own choices. Why this fascination with footwear?

Like cars, shoes combine function and aesthetics, the promise of mobility and the pleasures of style. As apparel, they offer not only protection but transformation; as autonomous objects, they serve as “bursts of beauty that defy the mundane,” writes Rachelle Bergstein in Women from the Ankle Down: The Story of Shoes and How They Define Us

Whether Jimmy Choos, Pumas or Toms, shoes let us stand out as individuals while fitting into similarly shod social groups. The complex relationship between the social and the personal is why it’s so hard to tell much about a shoe’s owner from a photograph alone -- and why shoes are so interesting. Their meanings require, and sometimes reveal, broader cultural context. Bergstein tells the story of a Texas high school that in 1993 punished students for wearing Doc Martens, falsely assuming that the boots signaled white racism when in fact they merely reflected students’ musical taste. A shoe, says Elizabeth Semmelhack, the senior curator at the Bata Shoe Museum in Toronto, “is an accessory that can carry a lot of cultural meaning.”

Posted by Virginia Postrel on July 10, 2012 in Fashion, Psychology, Appearance