These days when airlines try to sell their services with glamour, they usually wind up looking ridiculous, because the real-world experience bears no resemblance to the advertised ease. We hate to fly, and it shows.

But a new ad for British Airways pulls it off--not by promising passengers a glamorous experience but by evoking the enduringly glamorous archetype of the aviator.

Posted by Virginia Postrel on September 21, 2011 in Advertising, Aviation

Exulting In The Moment 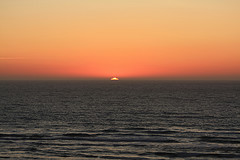 Recently I sat in a rental house on the Oregon coast watching the sun set on the Pacific in a magical array of oranges and blues. Adding to the magical aura was a girl of about 15 whom I had first noticed as we were driving back to catch the sunset. She had been running along the road in long easy strides, wearing her track-team colors.

Now, as the sun dropped to the horizon, she was sprinting up the hill on the road beside the house. Shortly past the house she turned and slowly jogged down, taking short, prancing steps to let her heart rate slow down. At the bottom of the hill she turned in a tight circle and once again sprinted up the hill in long powerful strides. I stopped counting after the eighth sprint of her solitary routine.

There was something immensely satisfying about watching this impressive display of self-discipline. Perhaps, thanks to Title IX, she hopes to compete in track all the way through college, maybe even on a scholarship. Perhaps she just loves to run, and running itself provides some kind of harmony and order to her daily routine, perhaps even to her life.

In any case, I was grateful to her for adding to the magic of a September evening. Her routine seemed nothing like some Sisyphean ordeal. Instead, watching her reminded me of seeing the exuberant exertions of a young animal discovering the physical power of its body and simply exulting in feeling that power in motion. I had felt much the same pleasure watching two small children run with their dogs on the beach that morning.

To observe someone exulting in the moment can be almost as pleasurable as feeling such exhilaration yourself. That morning my wife and I (both 60-somethings) had donned full-body wet suits, and, with the help of an expert surfer, had had our first experiences riding waves on a surf board. Making our first runs lying prone on the board, feeling the power of the ocean, even taking a few body-tumbling spills, was joyfully thrilling.

In the 19th-century, in the conclusion to his The Renaissance Walter Pater wrote (to the great displeasure of religious conservatives): “To burn always with this hard, gem-like flame, to maintain this ecstasy, is success in life....Not to discriminate every moment some passionate attitude in those about us in the brilliancy of their gifts is, on this short day of frost and sun, to sleep before evening.”