The Luxury Of Unencumbered Creative Time 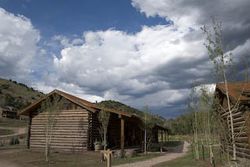 One of the most valuable gifts that writers, composers, and visual artists can receive is an extended stretch of time to focus on their work without the usual daily distractions. I just spent two weeks in a pilot program for a new artist residency created by the Brush Creek Foundation for the Arts. These residencies will take place in a lovely area of the 13,000 acre Brush Creek Ranch, located in a fabulously beautiful part of Wyoming.

Most of us are usually so surrounded by instantly available distractions and obligations that we sometimes forget what it is like to work with singular focus for days at a time.

The Brush Creek residency buildings are log structures, some of which were found locally, then dissembled and rebuilt in their new location. They were modernized with new roofs, electricity, and electric heat in the process. Each resident is assigned a work studio, and in a long log building each are assigned a bedroom with a bathroom—all of which were nicely furnished. There was a common library, kitchen, and dining area.

Everything was set up to let us work without distraction. Our meals were provided, with dinner being the only meal we were expected to eat in common. The other residents are not allowed to come to your studio unless invited. There were no televisions anywhere. The location is remote enough so that only one cell phone service worked (in this case AT&T). There was Wi-Fi internet which provided a way to stay in touch when necessary, but not with the blazingly-fast high connection speed many of us have at home.

For me, while at the residency, the distractions of daily life seemed remote and out of sight. Things such as bills, grocery shopping, chores, choosing where and what to eat, attending meetings, being on time—all such problems were temporarily absent. I could go to bed thinking about my project (finishing an opera) and wake up thinking about it, knowing that I could spend as many hours of the day as I wanted working on it. 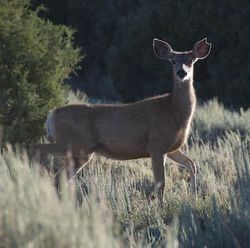 If as a resident you became mentally exhausted, you could take a walk in a stunningly beautiful landscape—seeing marmots, mule deer, horses, cattle, hummingbirds, goldfinches, swallows, hawks, and vultures. In my case I sometimes took a couple of hours to fly fish in some of the area’s world-class creeks and rivers.

In two weeks at the residency I finished work I had calculated would probably take more than a month. Much of that work efficiency came simply from staying focused. Books on time management sometimes say that in order to do some things, we need to deliberately choose not to do others. In our constantly plugged-in world, sometimes it is valuable to be reminded of what it is like to work when we are unplugged from everything except the one most important project we are trying to accomplish. Being reminded of that might just help us seriously  reevaluate the way we spend our time once we get home.

The Glamour Of Beautiful Servers 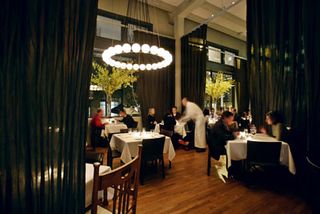 While dining last night at the Bluehour (shown to the left), one of the most fashionable contemporary restaurants in Portland’s Pearl District, my wife Carol commented that part of the expense of dining there was paying to have beautiful servers. Once she mentioned this, I realized that the serving staff was indeed remarkably attractive.

The stylish young hostess who seated us had long, curly blonde hair and wore a little red dress that, while undeniably sexy, was too fashionable to look cheap. The host (floor manager?) was young, tall, handsome, and wore a beautifully tailored black suit.

The other servers were all dressed in white. Carol thought that the young woman who filled our water glasses was more beautiful than Alicja Bachleda, the striking actress in Ondine, a film we had recently seen. This young woman had the tall, thin figure of a runway model, and, like runway models, she and the tall, handsome male servers maintained neutral expressions as they fulfilled their duties.

Their task, I realized, was not to engage with us. Instead, their role was to slip in like attractive, lithe-limbed apparitions and magically do whatever was needed to maintain the glamour of our dining experience. As when, for example, the knife I had used to spread butter was, at the proper moment, whisked away with effortless grace and replaced with a new one.

Our waiter was also dressed in white, and was tall, trim, older, and slightly balding. He seemed to love his work. He had a highly engaging smile, and a manner so relaxed that you immediately felt at ease. This made it easy to ask questions about the more exotic ingredients in various entrées.

The food was remarkably good and inventive, but the impression that I was most left with was now effortless the whole remarkable dining experience had been made to seem. Castiglione’s term sprezzatura came to mind because the staff appeared to handle everything with effortless grace, thus concealing the training and experience that had made this possible.

That maintaining this sense of effortlessness is difficult was made apparent the following evening. While dining in another fine restaurant the floor manager called attention to herself by wearing an ill-fitting suit made out of cheap material. A small mistake compared to the great food, but it led us to wonder if there would be other small mistakes. And once we had switched to that frame of mind, naturally enough, we did notice a few other flaws.

Posted by Randall Shinn on August 28, 2011 in Fashion, Appearance, Food And Drink

The Pleasures And Perils Of Dining Out 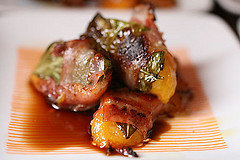 Restaurants often seem to have a hard time putting together a congruous dining experience. On the road last week we ate at a restaurant that someone in an art gallery told us would be the most interesting local place to try. The host and staff were nicely dressed, and the menu was elegantly printed, with some inventive entrees. The background music was interestingly eclectic, a mix of 40s music and rock classics. The decor was nicely done, with one glaring exception—the art on the walls looked like framed high-school art projects—mostly really bad stuff. The food was quite good, but the art was off-putting enough to downgrade the whole experience.

Next morning we had breakfast in a restaurant in a historic hotel. The room was nicely painted in Victorian style, with lovely botanical prints on most walls, and two large 19th-century engravings hung near a pair of beautiful Victorian sideboards. The food was good, but I was astonished that the music was a radio station playing rap. The servers and cooks must have chosen the station, because it was completely incongruous with the setting and the restaurant’s clientele.

In Santa Fe, which has numerous fine restaurants, we had some memorable meals in which everything about the experience was in harmony. A tapas restaurant had simple wooden tables, good art, nice decor, excellent food and wine, and a Spanish guitarist.

An elegant and eclectic French/American restaurant also had done everything well, although I still can’t fully understand why 1940s big-band music is so often used as background music for restaurants that are striving for an aura of elegance. I suspect that the '40s evoke an aura of elegant film and night-club glamour typically absent from our visual imagery of contemporary pop-music performers and performance venues. But surely there are other possibilities.

Our strangest on-the-road dining experience was an Italian restaurant in a city in southern Colorado. We tried it because our motel gave us coupons for a complimentary glass of wine (which turned out to be almost undrinkable). Almost every sauce (even the Marinara) included cream, and most of the patrons were notably overweight.

My wife commented to the waitress that the music was awfully loud, and she replied that it was only because one of the waitresses was now singing. Ah, a restaurant with singing waiters—a perilous prospect. As feared, we soon had the excruciating experience of hearing “Over the Rainbow” sung by a mediocre, too often out-of-tune soprano who didn’t understand how to use a mike. Thankfully, a couple of the other servers did a better job, allowing us enough time to eat modest amounts of our over-rich, gargantuan servings of food, and then quickly make our escape.

[Photo of "Pancetta-Wrapped Peaches with Basil and Aged Balsamic" by thebittenword.com. Used under the Flickr Creative Commons license.]

Posted by Randall Shinn on August 07, 2011 in Food And Drink