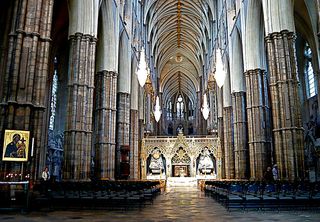 When your family church is Westminster Abbey, chances are you won’t be allowed to make up your own wedding vows. Your vows will likely come from the Church of England’s 1662 Book of Common Prayer. Its eloquence is so memorable that its phrases have become part of our language (“to have and to hold from this day forward”), as have phrases from the King James Bible and the works of Shakespeare. All these works were written at a time when eloquence was highly valued, and they were conceived with highly-memorable auditory beauty as a goal.

And although (Sir) Elton John has been invited to the upcoming royal wedding, the music for the ceremony will not be pop songs, but sacred music written for the church over the centuries by some of the greatest composers who ever lived. These include Thomas Tallis, William Byrd, Henry Purcell, George Frideric Handel, Edward Elgar, Ralph Vaughan Williams, Benjamin Britten, and many more.

The extraordinary nature of the building, the language, the music, the boy’s choir, the costumes, and all the rest will combine to proclaim to the world that this is no commonplace occasion, but the addition of someone to the status of royalty.

Americans often take a certain pride in having cast off a system that includes inherited positions of royalty and nobility, yet we also remain fascinated and slightly envious of it. Being “royal” is perhaps the world’s most exclusive group. Unless you are born a member, your only chance of getting in is to marry into it.

A royal wedding needs to be a highly visible, tradition-filled public event because it is a rite that makes the pair not only a couple, but a royal couple. The ceremony establishes a legitimate place for that couple’s children in the lineage of the royal family. The question of  lineage is not a division of wealth or child custody that can be sorted out by divorce lawyers or pre-nuptial agreements. When inherited title is involved, you are either born with it or not, and the traditions for determining that are centuries old.

Ideally a royal marriage will prove enduring and loving. But this is not always the case, as Britain’s current royal family has demonstrated. Even the highly troubled and ultimately contentious marriage of Prince Charles and Princess Diana, however, dutifully provided the royal family with two legitimate heirs before a fed-up Queen Elizabeth suggested they negotiate a divorce.

[Photo of Westminster Abbey by Wolfiewolf. Used under the Flickr Creative Commons License.]

Can A Toilet Be Glamorous?

It can certainly try...and Kohler is pulling out all the stops.

Posted by Virginia Postrel on April 23, 2011 in Advertising, Interiors

Glamour And Economic Dynamism: Does Growth Depend On Delusion?

"An illusion that is known to be false but felt to be true"--a good (partial) definition of glamour. Is it also the source of economic growth?

At the Kauffman Foundation's annual economic bloggers conference, I gave a talk on Colin Campbell's The Romantic Ethic And The Spirit Of Modern Consumerism

, an extremely interesting and provocative book that ties glamour (my word, not his) to the origins of the consumer society and the puzzle of open-ended economic growth. Here's the video:

Posted by Virginia Postrel on April 20, 2011 in History, Glamour Defined

I don't drink beer, but I occasionally buy it for parties. And when I do, I usually buy Corona, because I like their ads. Corona has long used a images of a tranquil beach to create a distinct brand identity--one that effectively combines gentle humor with the glamour of escape. In the latest campaign, which debuted last fall, Corona ups the glamour quotient further, offering pure projection without even the gentlest silliness to undercut it.

The "Find Your Beach" ads visualize what Corona's ads have always implied (since most beer drinking doesn't take place at the beach): "that the beach is where you make it,” as Marshall Ross, the chief creative officer for Corona's ad agency, Cramer-Krasselt, put it. “We want to give literal, visual permission for people to take the Corona mindset with them. Even to the ski slopes or the big city.” The composition of the images remains similar. The Corona drinkers are shown only from the back or in profile, encouraging identification and projection, and they themselves are gazing at expansive vistas. Grace, mystery, and escape--all the elements of glamour are there.

If you like the song, you can download it on Corona's Facebook page. And here, courtesy of Corona's Argentine branch, is a little more video escape (via AdRants).

Posted by Virginia Postrel on April 20, 2011 in Escape, Advertising, Food And Drink