Is Nobody More Glamorous Than Angelina? Is There Hope For Obama?

You have less than a week to vote in DG's Poll of the Month for September, over there in the right-hand column. (Scroll down.)

Posted by Virginia Postrel on September 23, 2008 in Fashion 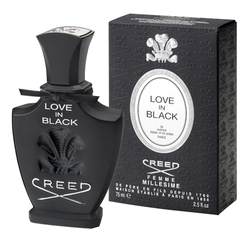 Style.com is reporting that Creed will introduce a new fragrance based on elements of Jackie Kennedy Onassis's life and style:

Virginia cedar, reminiscent of where she rode her beloved horses; night-blooming wildflowers from the Greek isle where she wed Aristotle Onassis; irises from Florence, a city that she visited frequently; and French blackcurrant, evocative of her heritage and passion for things Gallic.

Considering she wore Guerlain's Jicky and a number of others, none of which were "violet-Oriental" as Love in Black is said to be, this could be a mis-reading of her persona. Still, her hsuband once described her as fey,  one meaning of which is marked by death.  Goth Jackie.

Scented Salamander has a long poetic review.  Fans of Luca Turin's reviews can wade through a PDF of his blog to glean his views on other Creed scents.

J. Crew Advertising Curiously Reminiscent Of Something Else... 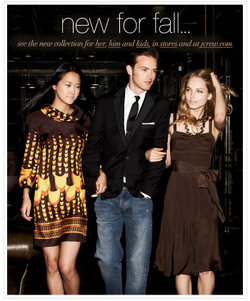 Posted by KateC on September 22, 2008 in Television, Advertising, Retailing 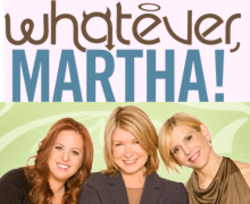 If you're not  watching Whatever, Martha!, you're hopeless, to be frank.  This  Fine Living series is the mashed up version of old Martha Stewart shows --MST3K for the silver-polish set.  It's  hosted by Stewart's daughter, Alexis, and her radio-mate, Jennifer Koppelman Hutt.  Andrew Goldman's  piece in NY mag has the whole saga, with the best quotes I've read in ages, from Alexis Stewart  on  various topics, including her mother's deal at Sirius radio:

She’s annoying, and she eats shit out of a can.

Pretending to know everything about beauty, meanwhile looking like this weird chinless monster.

But be warned:  the show isn't everyone's cuppa.

Posted by KateC on September 22, 2008 in Television

In the UK,  tobacco companies are panicking at the prospect of "plain packet" laws that would require cigarettes to be sold in plain boxes, without logos, graphics or color.  Denis Campbell writes in The Observer:

The Health Department recently closed its consultation on a raft of measures to reduce the number of smokers even further, which has fallen to 22 per cent of the adult population. They include plain packaging, banning cigarettes from public displays in shops, outlawing packs of 10 and getting rid of vending machines.

Evidently, the packaging entices smokers to buy premium brands. But what if this legislation has a reverse effect? Jewelers might bring back the elegant cigarette case, like the Fabergé item here.  You just know Bette Davis had something similar. 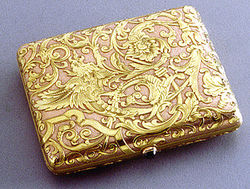 And That Wetsuit Shows She Has No Waist 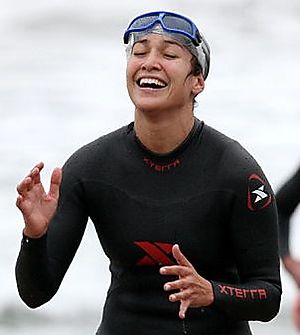 In late 2002, the NYT's Lynette Holloway speculated that Jennifer Lopez's ubiquity might hurt her: "Her popularity has dangers, the main one being overexposure. And Ms. Lopez's attempt to branch out from her hip-hip roots is gathering whispers that she could be spreading herself too thin." Sure enough, the combination of way too many tabloid stories and a disastrous movie flop seriously damaged her image. It didn't help that she could never decide just what that image was: glamour queen or Jenny from the block?
She finally chose the former. Since her appearance in Vogue Living's inaugural issue two years ago, I've watched as Lopez steadily rebuilt her public persona, in large measure by revealing herself more selectively. (The Vogue Living cover wasn't the beginning of that rebuilding, just the first example I noticed. I'd love to see a more-complete chronicle and strategic analysis.) "I'm in a different phase right now," she told Glamour in 2005. "I'm not everywhere." Someone apparently told her that glamour requires a little mystery.
In that light, it was interesting to see photos last week of a palid and very ordinary looking J-Lo as she completed a Malibu charity triathlon--an impressive athletic feat, but one that requires the kind of exertion that really messes up your hair and makeup. I guess keeping the photographers away wasn't an option. Or it's more evidence that supermom glamour is the trendiest kind.

Posted by Virginia Postrel on September 21, 2008 in Fashion

What's Wrong With This Picture?

The post office has released a new stamp, honoring Bette Davis. But a certain once-glamorous, and once-ubiquitous, artifact appears to be missing. 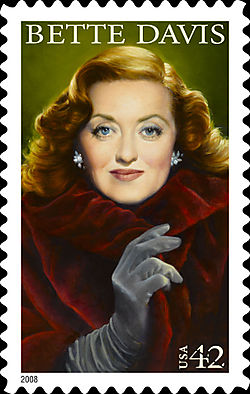 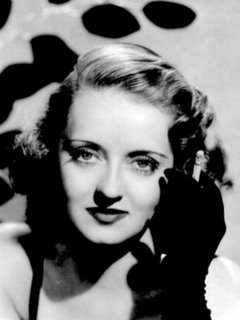 Posted by Virginia Postrel on September 18, 2008 in Smoking 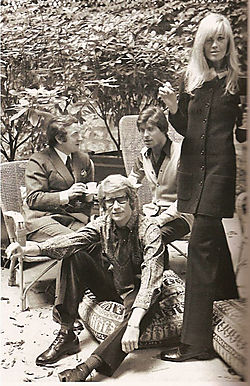 "Like Flaubert’s antiheroine, we saw glamour and modish excitement in the faraway and only boredom and dreariness in the here and now. In Reading, our industrial hometown, there was no shortage of dreary here and now.
We fed our fantasies and illusions by reading endless drivel about the Beautiful People in my mother’s glossy magazines. These effortlessly stylish trendsetters owned sprawling palazzos in Rome and ultragroovy pied-à-terres in Chelsea. They slept in six-foot circular beds covered with black satin sheets and white Persian cats. The Beautiful People were thin and gorgeous, and they had lots and lots and lots of thick hair, and their lives seemed to be about a hundred million times more fabulous than Biddie’s life and mine combined. They did not work much, they had buckets and buckets of money, which they spent on things like champagne and caftans and trips to Morocco to buy caftans."

Posted by Virginia Postrel on September 18, 2008 in Books, Quotes

Diaries Of A Groomzilla, Part 1

When the California Supreme Court legalized same-sex marriage, it unleashed a monster. This is the story of Groomzilla, who is planning an October 25 wedding.

I am a groomzilla, and like the bridezilla sisters who paved the way before me, I take no responsibility for my actions.  I blame my mother Jacquelyn. 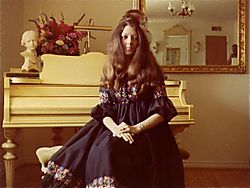 Growing up in my suburban Southern home, there were three sacred objects for which every visitor learned to quickly feign respect:  the big pink hurricane lamp, atop the big yellow baby grand piano, beneath the larger-than-life oil painting of my mother on her wedding day.  For twenty-five years, my mother's likeness held court in a formal sitting room that doubled as a museum of 1970s wedding glamour.

My mother wore a white long-sleeved, form-fitting satin gown, long auburn hair spilling over her shoulders from beneath a simple lace veil.  The painting was done in New York by a mail-order company that blew up wedding photos and converted them into oils on canvas before placing them in ornate, gold-and-ivory rococo frames with a built-in display light.  From her Madonna-like vantage point in the sitting room, Bridal Jacquelyn stood guard over the locked cabinet containing the unused wedding china, the pristine wedding silver, the never-unfolded wedding linens, and multiple volumes of wedding photos chronicling the golden age of frosted lipstick.  Once a year, everything came out to be re-organized and cleaned:  stemware, silverware, memories of "your bastard father," and the apocryphal story about when the rehearsal dinner reached a dramatic climax as the waiters brought out "the amazing European ice cream – strawberry – that everyone raved about."  (For the record, it was just Häagen-Dazs, but I never let my mother know that by the late 1990s this was hardly on par with Beyonce flying in flowers from Thailand.)

As an adult, I can laugh at the charming but tasteless spectacle of Bridal Jacquelyn's Museum of Pre-Divorce Splendor.  However, no matter how many hours of HGTV and Style Network I clock as a modern homosexual consumer, I will never shake the lessons learned in the shadow of the big gilded picture frame:  (1) your wedding day will always be your best memory, (2) you should spare no expense in the tacky crap you buy for your wedding, and (3) a bride is the ultimate glamazon diva, if only for a fleeting afternoon.  At the age of eleven I decided that one day, I would be memorialized in oil….though hopefully not in a dress, since my gay survivor narrative was to read a little more British aristocrat chic than plucky drag queen bildungsroman.

Fast-forward to the present day.  I am twenty-nine, an attorney in a fast-paced megafirm, living in 1100 square feet of gentrified bliss, with enough mortgage and student loan debt to warrant my own government bailout.  The California Supreme Court has affirmed my right to a wedding registry at Neiman Marcus, but it feels a bit like an unfunded mandate.  How can I plan a day worthy of memorializing in oil paint before the November election?  Where is my gay reparations check to help me afford a stylist, a calligrapher, an artisinal cheesemaker, three albino virgins with a harp, a glitter-and-rainbow machine, a team of midget aerialists on wires to simulate Baroque puti, a Valentino gown for my mother-in-law, a liposcuptor and a phalanx of angry queens with clipboards and headsets shouting at their minions, "Damnit, Bruce, I said 'CUE THE CHAMPAGNE FOUNTAIN!'  The champagne fountain was supposed to begin bubbling BEFORE the albinos started Canon in D!"

This, then, is my groomzilla story:  How can I simultaneously meet the expectations of glamour coming from a society that fetishizes gay style, live up to the childhood memories of my mother's wedding, and operate within the constraints of my budget, schedule, and fiancé's patience?

Next Thursday:  Groomzilla convinces his fiancé that couture expires faster than fruit flies, and the sweet smell of retail is in the air outside the wedding chapel.

Glam Or Spam? Cool Off

Readers voted against the red chairs. Designed by Pierre Paulin in 1966 for Artifort, the Concorde chairs graced the first-class Concorde departure lounge at JFK. Concorde might have been noisy but it looked great. Years ago, I flew out of Dulles on a press trip on the supersonic plane. At one point, looking out my tiny window, I could see the curvature of the earth at Mach 2. That's glamour. 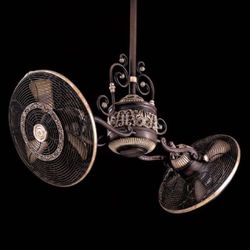 Moving on, what's the verdict on today's offer?