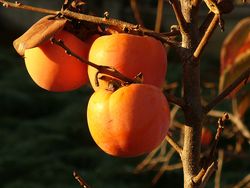 During the recent PGA golf tournament the male commentators expressed their tongue-in-cheek appreciation to the woman who phoned in to let them know that they should have identified the color of a golfer’s shirt as “persimmon.” The commentators readily acknowledged they would never have come up with that term themselves.

A friend who is an artist told me a story of walking with her husband and two of his friends. The men began talking about the great looking red car parked up ahead. The artist couldn’t understand what red car they were talking about. The men grew frustrated with her, and one of them walked up to the car, put his hand on it, and said, “This car.” Equally exasperated, she said, “That’s not red, it’s burgundy!”

In 1987 linguist George Lakoff published a book titled Women, Fire, and Dangerous Things: What Categories Reveal About the Mind. (The first part of the title refers to one of the four noun classes used in the Australian aboriginal language of Dyirbal.) One of the things he discusses in the book is the number of color terms that children are taught in various languages around the world. This varies from as few as two to as many as twelve. The colors black and white are always taught, and if a language contains more than two basic colors, red is always present. Beyond that, which other colors are taught varies from language to language.

“Persimmon” and “burgundy” are not basic color terms, but for people in art and design fields, restricting themselves to a dozen color terms would severely impoverish their vocabulary. People with a strong interest in a subject develop a rich vocabulary relative to that field. The relationship between color terms and how we perceive colors is a hotly debated topic.

The names for fashion colors seem to change with changing fashions. To my eye, the fashion color persimmon seems to range from a slightly reddish-orange to the fashion color “persimmon red.” “Persimmon” was an apt description for the color of the golfer’s shirt, but only someone with an interest in fashion would have been likely to use it. The commentators, on the other hand, could have discussed at length the differences between a 3 wood, 3 iron, and 3 hybrid. (Incidentally, tournament winner Y. E. Yang used the latter to make a shot so spectacular that the commentators felt a plaque would be placed in the fairway to commemorate it.)

[Photo of persimmons by pizzodisevo. Used under the Flickr Creative Commons license.]