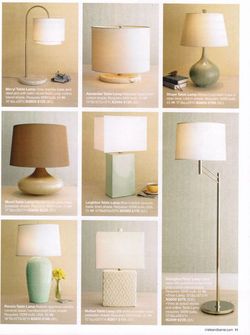 Notice anything missing from the lamps on this page of a recent Crate & Barrel catalog? Of course you do. You read the headline. With one exception (top left), the lights glow without benefit of electric power. They have no cords.

Whether through careful styling or the handy use of Photoshop, the catalog’s designers have removed the unsightly evidence that these wares require external support. Or maybe the photographers just clipped off the cords.

There’s high-brow precedent for such editing. Paola Antonelli, the Museum of Modern Art’s delightful design curator, tells me that when she arrived at the museum she discovered that all the cords had been removed from the collection’s lamps. Some unknown museum employee had apparently thought trailing cords spoiled the designs—authenticity be damned. Paola had the lamps rewired. After all, modernity includes electricity. Like the Crate & Barrel catalog, however, the photos on the MOMA site, still omit cords. (There are exceptions, but they’re rare and recent.)

Erasing a lamp's cord makes the photo not only neater but more alluring. The viewer isn't distracted by thoughts of where the cord would need to go in the room or by fears of tripping on it. And such wireless autonomy is itself glamorous, suggesting a beauty and function independent of the unromantic infrastructure of power plants and the annoying expense of electric bills. Like the glamorous protagonists of escapist Golden Age movies, who had plenty of money but never seemed to work, lamps without cords need no outside support.

Posted by Virginia Postrel on April 11, 2010 in Appearance, Grace, Interiors