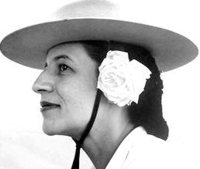 Why Didn't We Think of This? dept:

Erin McKean is the clever girl.

Mrs. Vreeland wrote her Why Don't You column while at Harper's Bazaar

, where she worked for twenty-six years, before joining Vogue in 1963,  just in time for all hell to break loose, in fashion and elsewhere.

DG.net has more planned on Mrs. V.,  so in the meantime, Twitter.