[Editor’s Note: With this post, DG intern Crystal Hubbard, an aspiring television writer and organizer of the L.A. chapter of Liberty on the Rocks, joins our writing crew.]

“A woman must continually watch herself. She is almost continually accompanied by her own image…” wrote art critic John Berger in his text on visual culture, Ways of Seeing

. Berger’s perception hinges on the word “must,” implying that there is something inescapable about the female vigilance to appearance; something within her psyche that compels a woman to preen and then guard the finished product.

But it is one thing for a woman to watch herself at trivial and mundane events (though she will) and a completely different matter when she has committed herself to public service. Suddenly, a decision to wear (or not wear) X-item becomes a clue as to how she will vote, how she will govern, how she will wield power.

When Senator Blanche Lincoln (D-Ark.) announced she would support the Senate’s motion to keep health care reform legislation alive, her historic decision—Lincoln’s was the last, and necessary, vote to further debate—was marked not with an accompanying dossier of accomplishments, but by what she was wearing. A relative unknown, Licoln chose to make her biggest senatorial moment into something almost not worth mentioning. “Her attire was school-principal prim—blue suit with knee-length skirt, orange silk scarf tied tightly at the neck,” wrote the WaPo's Dana Millbank. A meekly feminine showing, at best.

One has to wonder why she chose something so uninspired. A more memorable ensemble would have communicated that Lincoln realized she had climbed to the pinnacle of power, and had seized the national spotlight with an outfit worthy of the moment.

"My decision to vote on the motion to proceed is not my last, nor only, chance to have an impact on health-care reform," Lincoln said, having outlasted all the other pork-barrel beggars, and as Millbank noted, “She took a streetcar named Opportunism, transferred to one called Wavering and made off with concessions…”

If there is further motive—Lincoln is sure to remind her party, in the coming weeks of debate and deal making, of her solidifying vote—her propriety now becomes suspect. Following Berger’s observation to its logical conclusion, this may turn out to be only a penultimate moment for the senator from Arkansas, who gave a major piece of legislation a much-needed second wind, and may show up in something significantly more eye-catching the next time Harry Reid is found holding his breath. 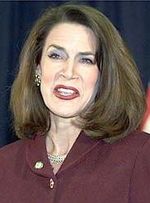 In his same essay, Berger also said, “men act, and women appear.” Which helps explain why fashion plays a less important role in the career of a male politico. Men are physically imposing without having to adorn themselves, and powerful just by being. If a man fails in the fashion—or appearance—department, we do not automatically question his judgment or ability to govern. We merely chastise him for not being mindful of the moment.

During a 2005 visit to Auschwitz to commemorate the liberation of Jewish prisoners, then-Vice President Dick Cheney sported an ill-advised parka, that, as Pulitzer Prize winner Robin Givhan wrote, made him look “like an awkward child amid the well-dressed adults.” Former interim UN Ambassador John Bolton also received the Givhan treatment during his hastily made-up appearance before the Senate Foreign Relations Committee, in the days leading up to his failed (permanent) appointment as Ambassador.

…when he settled in before the Senate Foreign Relations Committee this week to answer questions about his record, his philosophy and his intentions at the U.N., he looked as though he did not even have enough respect for the proceedings to bother combing his hair -- or, for that matter, straightening his tie, or wearing a shirt that did not put his neck in a chokehold. Bolton was one wrinkled suit away from being an insolent mess.

For men, we playfully mock and move on; for women, we analyze and critique ad nauseum. It’s one thing for Dick Cheney to look as though he should be clearing the driveway at Number One Observatory Circle; it’s another to say that since a woman looks like she could be the offspring of Tammy Faye Bakker we should question her political acumen. When the contentious results of the 2000 presidential election put Katherine Harris in charge, fair or not, the nation took one collective look and said, “Uh oh.”

We react this way because we count on women to “continually watch” themselves. And if our elected women aren't watching, if they too are schlepping around their closets like the worst of the boys, then they are—whether they know it or not—signaling that they are an aberration, out of touch with what it means to be a woman, and negligent of one of their most sacred weapons: themselves.

Posted by her? on December 13, 2009 in Fashion, Politics, Appearance