What We Forget About The Era Of Glamorous Air Travel 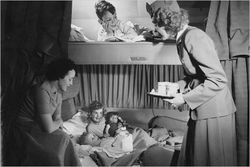 This photo appeared in Sunday's NYT business section, as part of a photo feature on the lost glamour of air travel. (The feature also appears as an online slide show.) The feature makes the important point that air travel is both more common and much more affordable than it used to be: "In 1940, passenger planes in the United states carried only 3 million people, compared with 17 million in 1950 and about 650 million in 2008."

Like many of the images that create our idea of glamorous air travel, this photo is staged. It's a marketing image created by Pan Am, which probably featured a mother and children to emphasize the safety of flying to a public that still thought of aviation as dangerous. But even a staged photo can reveal an unacknowledged flaw concealed in our glamorous image of that lost era.

Why do they need beds?

For the same reason that international airlines compete to offer more and more luxurious beds to their premium-class passengers: Because the flight takes a long time. Only in the case of the Pan Am photo, the flight is a domestic one. And bumpy.

I wrote about the lost glamour of air travel (and tested one of Virgin Atlantic's Upper Class beds) in a 2007 Atlantic column.

Posted by Virginia Postrel on January 18, 2010 in Transportation, Aviation, Travel