Video Girl Barbie And The Future Of Female Body Image 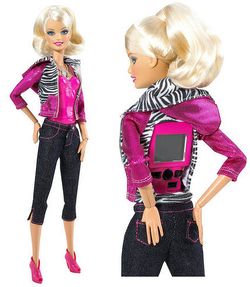 There's a new Barbie on the scene, and the rest of the dolls on the shelf aren't quite sure what to make of her. She's got long blond hair and bright blue eyes, just as she always has, and a smooth, tanned, curvaceous body. And just like most Barbies you've known over the years, she loves any color as long as it's pink. But there's something different about this new doll. When you meet her, you might notice there's a special little necklace hanging just over her sternum, or as she turns to leave, that there's a flat panel screen between her scapulae. Meet Video Girl Barbie, presented to the world this week at the International Toy Fair, a kind of Flip camera with a face that Mattel promises will let you look into the world of Barbie.

There's something interesting about this notion of looking into Barbie, or looking through her. Barbie has always been a lens into a different world for girls, a glamorous teenaged or adult world full of fashion, parties, careers, and dream houses. This was, after all, the intention behind the doll as it was invented by Ruth Handler — to give girls a way to act out their fantasies and fears through imaginative play. This premise of projection was also the reason for the most controversial feature of Barbie's physicality — her breasts — because Handler felt a mature physique was essential to allowing girls to envision their future selves. The Barbie business model, with its endless parade of kits containing outfits and accessories, serves as stimulus for these projective fantasies, providing ample conduits to aspirational worlds.

It seems to me that girls have never had trouble looking into Barbie's world. Because the nature of Barbie is such that at any point in time, Barbie's world is at least partially (often mostly) in a girl's head, that world is personal and accessible. Barbie is a sketch, just defined enough to inspire a story. She's an outline to be inhabited, a room to decorate with your own desires. The doll and her things provide the form and the context; you provide motivation and narrative. Talking to friends who played with Barbies as children, the imagined scenes vary wildly, even with the same props. Some girls staged fashion shows in the Dream House while others were hosting dinner parties. Some were getting dolled up for the prom while others were making out with Ken behind the bleachers. Barbie's stories are as varied as our own because her stories are our stories. Maybe not the ones we lived, but the slightly more glamorous or dangerous ones we once wished to live. Girls see through Barbie into these fantasy worlds, and they do it effortlessly.

To think that such a view could enhance the fantasy of Barbie is to assume that Barbie's world is the molded plastic one Mattel produces in its factories, and not the ethereal one in the female consciousness. The most interesting things a girl sees in Barbie are not things she sees with her eyes, but with her mind.

Making the leap to Video Girl Barbie, a doll you look through, seems logical but oddly literal, an Amelia Bedelia kind of goof. What can you see in looking through Barbie like a periscope that you can't see with your own eyes? To think that such a view could enhance the fantasy of Barbie is to assume that Barbie's world is the molded plastic one Mattel produces in its factories, and not the ethereal one in the female consciousness. The most interesting things a girl sees in Barbie are not things she sees with her eyes, but with her mind.

Given that, this seems less a doll than a tech toy, and I imagine it will have big appeal to girls on this level. A video camera is a video camera, and it's fun regardless of the housing, though girls today are probably savvy enough that they don't need technology to be softened up with fashion in a bionic Barbie.

But the bionic nature of this doll — a strange mashup of hard tech and feminine physicality — does raise a different set of interesting questions. As we move closer to an era of post-human body modification, what kinds of new body types will emerge as aspirational? If in the past five decades Barbie has represented a standard of beauty that can be blamed with a rise in body modifications ranging from breast implants to blond highlights to anorexia to tanning, how will she evolve as a standard in a world where the available modifications are increasingly technological? Will Barbie offer a new viewpoint on the form and function of the female body as the lines between man and machine are increasingly blurred?

If these sound like imaginary inquiries better left to the world of futuristic sci-fi films, think again. Already, the field of wearable technologies is electrifying fashion, exploring ways our clothes can behave or react like smarter, more beautiful skins. Designer Hussein Chalayan is known for his avant garde work with wearables, exploring how robotic elements can create extraordinary displays of movement and light. Joanna Berzowska of XS Labs is another designer working in this space, fusing fiber and wire to create striking interactive garment-sculptures. Often these designs suggest new functions our bodies might take on in the future, like increased sensory capabilities or protective response mechanisms. The subtle displays of Ying Gao's Walking City dresses, for example, function like hypersensitive second skins, unfurling and rustling in reaction to the proximity of others. Powering many of these innovative designs is the LilyPad Arduino, a washable microcontroller that can be fully integrated into clothing, developed by Leah Buechley at MIT's Media Lab.

These are technologies worn on the body, without requiring any intrusion or permanent modification. But those innovations are coming too. Discussions of augmented-reality contact lenses are in the offing, and just this week, the New York Times reported on the development of piezoelectric body implants that would allow us to convert our bodily movements into energy that can be used to power our electronics. Already we see people who seem chained to their iPods or mobile devices — imagine if one day we actually plugged them into our skin to recharge them. Or stopped by the Apple Genius Bar for a surgical battery change?

If these potential innovations sound eerie, think about how breast implants sounded the first time you heard of them. Body modification is always unsettling, sometimes even long after it has become widespread. But all of these designs, whether worn on the body or inserted within it, are pioneering new possibilities in the shape and performance of the human physique. As we gain more power to control how our bodies look and what they do, which of these designed bodies will move towards the mainstream? Which will become new aspirational models? Will techno-bodies ever be sexy?

I don't propose that Video Girl Barbie is in any way an attempt on the part of Mattel to forge a new post-human female ideal. (The violence of the mashup — Barbie's viscera removed and replaced with a TV — would make that a vision more appropriate for R-rated horror films than Toys 'R Us.) But the juxtaposition has made me wonder what the Barbie of 2029 looks like. Will Barbie at 70 be a stunning cyborg? If we saw her today, would we think she's beautiful? Or, in an ironic twist, will Barbie's plastic figure seem nostalgically natural in comparison with our own bodies of the future?