Ugly Is The New Pretty

Gray, for fashion and for home, is  the color of the moment. And while some might not immediately associate that color with traditional beauty, it can be truly gorgeous.

"Grays have been stereotyped as indicative of an economic slowdown but in the last 10 years gray has moved away from a poor color or a drab color to a sophisticated one," said Leslie Harrington, executive director of the Color Association, a New York Marketing company established in 1915.

Now, combine the abundance of gray with the strange black lipstick trend Kate blogged about and the chic set embracing goth and you might think we're a nation of consumers obsessed with doom and gloom. And though that might be warranted, consider it part of a larger trend. Didn't you know, kids? Ugly is the new beautiful. Sure in certain circles ugly has always been a marker of beauty, but now we're all kinda catching on. Why, Ms. Harrington said so herself:

"We don't want to be perfect anymore. In fact, there's a strong need not to be. We're realizing now that beauty actually lies in things that aren't perfect, things that have a unique character unto themselves."

Which segues so nicely into the example of the UGLY agency, which recently teamed up for a casting call for an Ed Hardy ad campaign. Press release coming at ya:

"UGLY was formed in London in 1969 by two forward-thinking photographers who recognized the need in print advertising for models who were not traditionally beautiful and the UGLY idea was born." 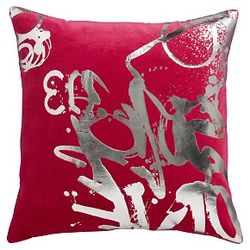 So here we are; ugly is back and this time it's GLAM! Unlike the dreary grunge look the 1990s gave us, this time around dirty is "sophisticated" and shiny and silver and high-tech (high-tech will save us, right? It just has to save us. Right?) Ugly is the new coffee table book. No, really, it literally is--check out Sonic Youth's Thurston Moore's interiors book Punk House

. It's also in upper crust bedrooms, with Douglas Homer's Bronx Project graffiti 18th century highboys, which cost a pretty penny, and on dining room tables with Areaware's Delft dinnerware with taggings from New York City. Hey, even affordable CB2 wants you to graffiti your couch.

It's all very clever, this ugly. Does it mean we're embracing the urban environments we've fallen back in love with? Does it sneer at economic hardships and give a tongue-in-cheek eff you to whatever the world can throw at us because ha! We can take it on!? Or, god help us, is this just a sign of the times saying we can barely keep our heads above water.

Posted by Paige Phelps on November 26, 2008 in Fashion