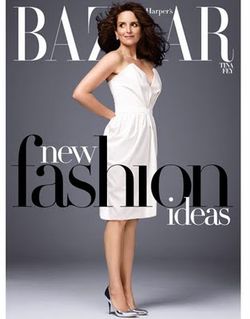 In the November 2009 issue of Harper's Bazaar, Tina Fey trades in Liz Lemon's schlumpy cardigans for several seriously gorgeous designer cocktail dresses. They say that the clothes make the man, but in this case, I wonder.

On the subscriber cover (at left), in white Yves Saint Laurent, Fey looks pretty. But she also looks awkward, like a jockish girl all dressed up for a high school dance. Like she can't wait for the shoot to end so she can wash her face and get back into her baggy jeans. It just doesn't feel like Tina Fey. But it's a fashion magazine, so she's in a dress.

Inside, Fey admits that she's not really much for dressing up and that Liz Lemon, the character she based on her early years as a writer in NYC, "has little to no style."  She also admits that Lemon's character could use a little more confidence.

This Bazaar cover just looks all wrong to me. But what I wonder is this: who's responsible for that? Should Bazaar have dialed down the glam factor, dressing Fey in something more comfortable and familiar? Or is Fey selling herself short by not totally owning that dress?