The Secret Lives Of Servers 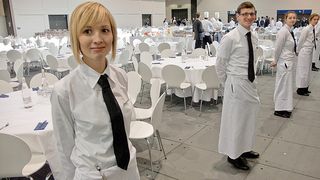 At a recent dinner in the harbor town of Newport, Oregon, the appearance of our youthful waitress sent confusing messages. She appeared to be about 20, had a slender figure, and wore no makeup on her innocent-looking face. She had heightened the aura of innocence by gathering her hair into pony tails on either side of her face, in a style popular with Japanese schoolgirls.

I then noticed that the edge of her left eyebrow was pierced by a delicate gold ring, and that each ear had multiple piercings. When she walked away, I could see that a dark-blue geometric tattoo covered most of her left calf. The piercings and tattoo suggested considerably less innocence than the rest of her appearance. Yet when I was paying the bill she mentioned that a customer had just spilled beer on her, which upset her because she didn’t drink.

Many people work part time as servers while going to school or pursuing careers where income is unpredictable. I would have loved to ask our waitress some questions about herself, but I was there with some of my wife’s relatives, and somehow it didn’t seem appropriate. On occasions when I have asked, I have discovered that I was being served by pre-med students, actors, artists, published novelists whose sales were modest, graduate students, and a variety of other aspiring individuals. For them, working in a restaurant was seldom the role that they most identified with, and from their appearance you would often have had a hard time guessing their larger aspirations.

I found this waitress intriguing. Was her innocent look a guise imposed upon her by this family-friendly restaurant? When she was not working as a waitress, did she wear makeup, and did it go with the tattoos and piercings? Was her abstinence from alcohol part of a healthy diet lifestyle that helped her stay slim? Did she have unsuspected aspirations? Was her “normal” appearance so different that I would scarcely recognize her? Did she turn into some glamorous creature of the night when she went on dates? Or was she simply an innocent young woman whose piercings and tattoo were nothing more than her idea of fashion?

["A Smile with Every Meal" is from Andrew Stawarz's Flickr photostream, and is used under the Flickr Creative Commons license.]

Posted by Randall Shinn on August 24, 2010 in Mystery, Appearance, Makeup