The “Myth” Of French Glamour 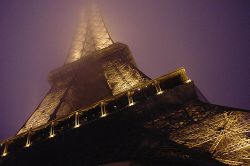 In honor of glamorous Frenchwoman Catherine Deneuve’s 66th birthday (which is today), I have a question: What is it about French women that is just so glamorous? And how can I get some of it?

I ask myself that question more frequently than I should probably admit – every time I painstakingly wrap a scarf around my neck or throw on a striped, boatneck shirt in an effort to grab a little of the nonchalant chic that French women seem to be born with.

I’m hardly the first frustrated American woman to ask that question. Last January in the New York Post, writer Maureen Callahan posed the question, albeit in a snarkier tone, in her article, “French Women Can Suck It.” In an effort to uncover the roots of the myth that “French women are better than we are,” Callahan interviewed a couple of legitimately glamorous French women, both of whom hedged a little when asked about French glamour.

Mireille Giuliano, author of the French Women Don't Get Fat

books and president and CEO of Veuve Cliquot, Inc., says that it’s not really all French women who appear so glamorous, it’s just the Parisians. And they’ve got American counterparts in New York. (Full FTC-approved disclosure: I once received a signed copy of one of the French Women books, along with a very nice handwritten note from Ms. Giuliano, thanking me for something complimentary I’d written about the books. Glamour or no, I was charmed.)

Callahan also spoke with Garance Dore, a Paris-based street style photographer-blogger (and girlfriend to Scott “The Sartorialist” Schuman). Dore said, “For me, the French woman is a nice and beautiful myth.”

Both Giuliano and Dore seemed eager to assure their American fans that the “French” thing can be overcome. That there’s no glamour gene that exists only in French DNA. The thing is, while both praise the confidence, style, and attitude of American women (especially New Yorkers), I’m pretty sure they both believe that French women have something special in the glamour department.

At the beginning of her second book, French Women for All Seasons

, Giuliano writes about the reaction the first book generated among her French female friends. In short, they were outraged. She quotes one, who said, “How dare you give away OUR secrets to the world?” This was specifically said with respect to “not getting fat,” but the books are really about the way of life that keeps French women famously trim – and glamorous. Somebody in Giuliano’s circle, at least, believes that French women have a corner on the fabulous market.

Garance Dore’s story is similarly murky. Just a few weeks before the NY Post article ran, Dore was interviewed by New York-based writer Joanna Goddard. The subject? How Goddard could stick to her New Year’s resolution to “dress like a French woman.” Dore gave a real, and thorough, answer, involving stripes, scarves, “unconcious layering,” an aversion to color, laziness, and an appreciation for the “sexy detail” (though it seems to me that “sexy detail” is pretty vague…and probably where a lot of American women get caught up). Gore also shared this:

So there it is. French women – from Deneuve to Dore – do share a secret. And, unfortunately for us Yanks, even when it’s spelled out, it’s vague. Guess it’s back to scarf-tying class for me.

[Photo of the Eiffel Tower at dusk, the ultimate glamorous building, by Flickr user stevenvanwel. Used under the Creative Commons license.]

Posted by Kit Pollard on October 21, 2009 in Fashion, Appearance