The Mystery & Magic Of Hats—and A DeepGlamour Birthday Party 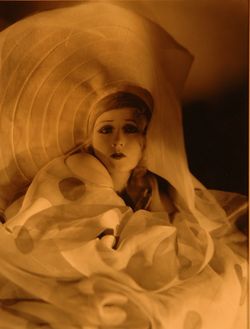 This is Anita Page, as photographed by George Hurrell in an extraordinary hat. (Page is a fascinating character: a long-lived Golden Age star who made only one movie between 1936 and 1996, then re-emerged in cheapo horror flicks as well as documentary interviews about studio-era Hollywood. She died last September at 98 but still has a movie in post-production.) This hat is presumably a costume, but women used to take as much pride and interest in their hats as they do today in shoes and It bags. Alas, the informality of the 1960s killed off hats. They became functional—a way of protecting yourself from sun or cold—rather than expressive.

Hats are now enjoying something of a resurgence among hipsters and fashionistas, with fedoras, cloches, and fascinators showing up on people in the business of being noticed. The paradox of a hat is that it simultaneously conceals and calls attention to the wearer—the very definition of a glamorous accessory. (Think also of sunglasses, fans, and cigarettes.)

Next Thursday, August 20, DG is curating an event—and throwing ourselves a birthday party—as part of the inaugural L.A. Downtown Fashion Walk. Our theme is the glamour of hats, with creations on display (and in some cases for sale) from local designers Louise Green, Arturo Rios, and Stella Dottir as well as collector Wendy Ann Rosen's renowned "House of Hats." (Some of Wendy Ann's hats are featured in this amazing V&A exhibit, curated by Stephen Jones, which is now on a two-year world tour.)

Plus, Project Runway's Andraé Gonzalo will join our friend Kate Hahn to sign their book Forgotten Fashion, excerpted in one of our very first posts, which includes some of Andraé's illustrations. The party starts at 6:00 p.m., giving Project Runway fans plenty of time to come by before taking off for premiere viewing parties (which is exactly what Kate and Andraé are doing).

Here are the particulars:

Dress glamorously, and wear a hat. You could win a prize.

Posted by Virginia Postrel on August 11, 2009 in Fashion, Mystery