The Mystery Beyond What's There 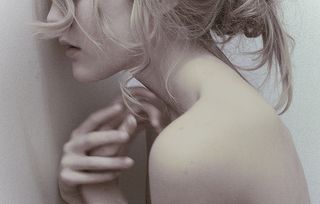 I find this photograph very moving, and normally I might comment on various technical aspects such as the framing, the lighting, the tone, the pose, and so on. But I chose this photograph because it beautifully illustrates something that can be crucial to the concept of glamour—namely that artistic impressions are sometimes magical because of what the artist has chosen to leave out.

If we were seeing this young woman in real life, we could look move our eyes and see more, we could listen, we could ask questions, but here our perceptions are bound by the edges of the photograph and by the silent nature of the medium—we can only see what the photographer has allowed us to see. Far from limiting our responses, what we cannot see produces gaps, and these gaps allow us, as viewers, to let our imaginations and unconscious responses add something inexplicable to our perception of the image.

No one has ever expressed this thought better than Dylan Thomas in his Poetic Manifesto written in 1961:

You can tear a poem apart to see what makes it technically tick, and say to yourself, when the works are laid out before you, the vowels, the consonants, the rhymes or rhythms, ‘Yes, this is it. This is why the poem moves me so. It is because of the craftsmanship.’ But you’re back again where you began.

You’re back with the mystery of having been moved by words. The best craftsmanship always leaves holes and gaps in the works of the poem so that something that is not in the poem can creep, crawl, flash or thunder in.

In the case of this photograph, added bits of information (it’s a self-portrait, and she titled it, “It’s not your fault, it’s not your fault,”) may only serve to open up new holes for our imaginations to fill.

Posted by Randall Shinn on May 16, 2010 in Mystery, Princesses, Glamour Defined