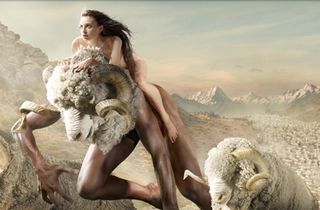 One of the most successful companies producing Merino wool clothing is Icebreaker, a New Zealand company. Icebreaker is known for using evocative images in their advertising, and their Summer 2010 ads are no exception. In one a fair-skinned, wide-eyed naked woman rides a dark-skinned, naked Merino-ram-headed man who is at least three times her size. The ram-man is leading a column of Merino sheep numbering in the thousands. (The image shown is a crop taken from the central quarter of the full image.)

One of the themes of Icebreaker’s advertising is symbiosis, with human forms covered in soft, warm, odor-absorbing Merino wool clothing. However, the use of naked human bodies in snowy mountains seems completely beside that point. I have always found their ads fun, but some people who live and work near the Icebreaker store in Portland have found huge window displays such as this image offensive. A salesperson in the store told me that this image has been the most controversial yet. 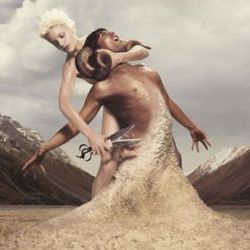 Some people object to the petite fair woman being carried off by the huge, dark-skinned beast, which they feel has both racist and sexist overtones. But, as seen here, in one of their earlier ads an even fairer and frailer woman clearly has the advantage over a darker-skinned beast-man more her size. And it is a longstanding cliché of Romance novels that the fair heroine falls for a tall, dark, handsome, somewhat unruly man whom only she can manage to tame.

Icebreaker does not shy away from the cross-species “monster” implications of their images. Early ads showed a white-haired woman with sheep ears. But beast-humans have a long mythological history—witness creatures like satyrs, centaurs, and the Minotaur. According to Greek legend the Minotaur, born with the head of a bull and the body of a man, was the offspring of a mating between the wife of Minos, ruler of Crete, and the Cretan Bull. I suspect that Icebreaker is merely pushing the notion of symbiosis into mythological imagery.

I suspect few men can see an image of a woman preparing to shear a beast-man’s groin without feeling a twinge of terror, but ultimately I see these images as more fun and tongue-in-cheek than genuinely disturbing. On the other hand, I also think that there is no question that they were intended to be provocative, and in that sense, they have been successful. Apparently too much so for some people’s comfort.

Addendum, August 30, 2010: A few days after writing this post, I remembered that in his delightful book The Happiness Hypothesis

Jonathan Haidt uses the metaphor of a rider on an elephant to represent the scale of our newer language-oriented, reasoning part of the brain in relationship to the faster, automatic processes in various older and incredibly powerful parts of the brain. Our ability to accomplish things depends in part on creating a good working relationship between the rider and the elephant.

The day that the post went up, my wife Carol and I did a lovely, but tiring 5.5 mile hike in the Columbia Gorge. That afternoon we spent some time driving around Oregon with Carol giving me directions from the map. At some point, as the afternoon wore on, I began to feel like the car and I were a beast, and that Carol was a rider directing us. I expressed that thought, and Carol said if the beast was tired it was all right if we went back.

Now when I look at the image of the woman riding the beast-man I consider the possibility that she may be doing her best to control the direction of the herd by using her hands to steer the ram-man's head where she wants to go.

Posted by Randall Shinn on August 26, 2010 in Fashion, Advertising