The Gospel According To Coco Chanel: On Fearlessness (Part III) 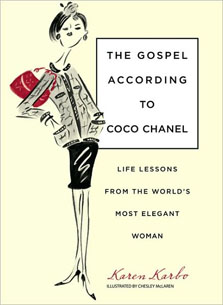 In yesterday's installment from The Gospel According to Coco Chanel: Life Lessons from the World’s Most Elegant Woman

, Mademoiselle Chanel turned jersey, formerly the stuff of men’s underwear, into the basis for modern fashion. With no margin of error, she invented sportswear. In our final excerpt, author Karen Karbo considers the value of being a bit of a bitch.

Perhaps it’s not that unusual to exhibit courage in the course of finding our métier. In becoming an attorney, a professor, a web designer, a hair stylist, there are challenges that must be met, doors through which you must step to get to the next level. There are crossroads, required leaps of faith, and moments when you need a new idea (jersey!), and thin air is the place you’re forced to look for it.

But Chanel was fearless on another front. For the length of her long life, she said what she thought. In case this doesn’t strike you as such a huge achievement, consider the cottage industry of best-selling books about the apparent inability of women to speak up, to negotiate, to press on with their ideas when they feel they’re not being heard. “The Daily Asker” is a popular blog, wherein the blogger has set herself the goal of asking for something every day. Yes, women can cry and women can rage, but even now, we still struggle with just saying what’ son her minds.

Chanel was not just a straight talker, she was a back talker, a woman who embraced her own churlishness. One of the cares she lost when she decided to be someone and not something was that of talking around her real thoughts and feelings, so as not to offend. Really, she couldn’t give a damn. Bring it on.

Stendhal (author of The Red and the Black

and also ahead of his time) famously observed that the way to offend a Parisian was to call her kind. On this front there is no chance of offending Mademoiselle Chanel. She could be ruthless in her honesty and often downright mean. Unlike most American women she was never tempted to channel her inner, crowd-pleasing Labrador retriever. While she was a masterful flirt, she never felt the need to be kittenish in order to compensate for her wealth and fame.

Once, during the end of the 1920s when Chanel was the queen of Paris chic, after she’d created the famous black dress and after the massive L’Exposition des Arts Décoratifs et Industriels Modernes, where rival Paul Poiret had torpedoed what was left of his brilliant and erratic career by showing opulent, floor-length gowns in silver, lamé, velvet taffeta, and chiffon, totally missing the “modern” aspect of the exposition, Chanel ran into him on the sidewalk. Poor Poiret had not just fallen out of favor, his finances were also in ruins. In addition to the expensive, out-of-style gowns he’d just shown at the Expo, he’d insisted on exhibiting them on a trio of electrically lit river barges, which cost the moon. Before this, in an effort to shore up his reputation and combat Chanel’s stubborn devotion to plainness, he even created dresses lit from the inside with tiny bulbs. At the risk of sounding Seusssian: He was down, she was up. He was over, she was on top. When she met him that day on the sidewalk, it would have been nothing for her to have been gracious.

Seeing Chanel in her little black suit with white schoolgirl collar and cuffs, Poiret said sarcastically, “What are you in mourning for, Mademoiselle?”

She said, “For you, dear Monsieur.”

Chanel’s wit was not gentle but combative; she was Dorothy Parker with a pair of shears. She sneered at the husbands of her clients and said, “Those grand dukes were all the same. They were tall and handsome and splendid, but behind it all—nothing; just vodka and the void.”

Chanel’s wit was not gentle but combative; she was Dorothy Parker with a pair of shears. Aside form her basic French disinclination to be agreeable, and her Cinderella complex, she bore the indignity of being a mere dressmaker. Even as she was becoming a success, when her hats were being worn exclusively by major actresses and she expanded her business to include both Biarritz and Paris (by 1917 she had five workrooms; in one workroom sixty seamstresses worked on clothes for Spain alone), she was routinely snubbed by the aristocratic women who were paying astronomical amounts for her clothes. They would spend hours having a fitting at her shop, then the next day pretend she was invisible when they ran into her at the races. This wasn’t unusual. Couturiers were considered tradespeople, no better than cabinetmakers and knife sharpeners. Charles Worth, the so-called father of haute couture, would cross the street when he saw a client, so as not to put her in the position of having to ignore him.

Then came Chanel with her neat, fresh clothes and her disinclination to take crap from anyone. She was charming, but she refused to censor herself. She sneered at the husbands of her clients and said, “Those grand dukes were all the same. They were tall and handsome and splendid, but behind it all—nothing; just vodka and the void.” Of the increasingly zaftig Colette she said, ”Colette preferred two grilled sausages to love.” She called Picasso “that Spaniard, with his hat.”

The result of all this mouthing off was not what you might expect. Rather than driving people away, Chanel’s devotion to thinking for herself, aloud, drew them to her, made her intriguing. She simply did not have the time, the energy, nor the inclination to care what anyone thought of her. Life was serious. She was serious. She defined luxury as liberty, and stopping to censor herself, to make herself pleasing to others, would be depriving her of luxury. Until she was a very old and very cantankerous old lady, Chanel was beloved. Axel Madsen closes his superb biography

of Chanel with a kind, malice-free remark by the sausage-loving Colette, “It is in the secret of her work that we must find this thoughtful conqueror.”

Am I suggesting then that we err on the side of being a big ol’ bitch (or in this case a tiny, chic bitch)? Yes I am.

Posted by Virginia Postrel on October 07, 2009 in Fashion, Books, Icons