The Glamour Of Nuns 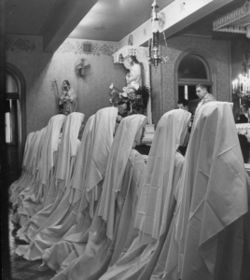 Meryl Streep's decidedly unglamorous turn as Sister Aloysius in Doubt has me thinking about the largely lost glamour of nuns.

I'm not talking about the satirical stylings of the Sisters of Perpetual Indulgence (who look not like nuns, even satirical ones, but clowns) or one Father Antonio Rungi's sincere and short-lived idea for a "Miss Sister Italy" pageant.

No, I mean real glamour: the enchantment that stirs an audience to project themselves into an ideal life, that heightens our longing for escape and transformation by presenting an object that embodies our desires.

In this 2002 Atlantic article, Mary Gordon recalled "The helpless love of a certain kind of girl for a certain kind of nun. We loved them the way we loved movie stars and the way we loved God." (This discussion of nun dolls recalls a similar fascination.) Gordon uses the word glamour to describe her childhood view of nuns. They represented a more desirable life—mysterious and seemingly perfected. A few excerpts:

I know that my father wanted me to be a nun. He was a Jewish convert; perhaps this accounted for his romanticism. He died when I was seven, but I remember his saying, with real pride, "My daughter will be either a nun or a lady of the night." He was a man of extremes. I didn't know what a lady of the night was. It sounded glamorous, but no more glamorous than the image of a nun. He and I had a party piece about nuns. He would say, "Honey, what do you want to be when you grow up?" And I would say, without skipping a beat, "A contemplative."

I knew exactly what I meant. I knew, even at four and five, what contemplation was: Silence and prayer. Union with God. I had knelt beside my parents in the dim light of early-morning masses. I knew as many prayers and hymns as nursery rhymes. More. I dreamed of First Communion, believing those who said it would be the happiest day of my life. And I had had a glimpse of a real contemplative, a glimpse that would press itself into the hot wax of my imagination—an indelible image marking a life devoted to the creation of images....

A Jewish friend with whom I was watching [The Nun's Story

] found it all appalling. I wondered why I did not; why I found it enchanting—the silences, the gliding walk, above all the belief in perfection, which I have spent many thousands of analytic dollars trying to give up. I imagined that if, like Audrey Hepburn, I could confess my faults to Edith Evans (the wise mother superior, the superior mother, blessed with the gift of discernment, her hard-won wisdom shining in her sorrowful eyes), if Edith Evans would bestow on me the secret smile of favor that she bestows on Sister Luke, if Edith Evans would make a cross on my forehead every morning, I might have the stamina to try for perfection. The stamina not to give it up as impossible. The stamina to believe that perfection is not a delusion, a trap. As Jesus said, "You, therefore, must be perfect as your heavenly Father is perfect." Of course, we were meant to believe that we never could be perfect but that the attempt was infinitely worthwhile.

Gordon now sees her childhood view of nuns as an illusion, as, of course, all glamour is. 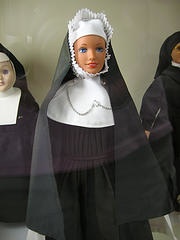 Doubt does not partake of this glamorous view of nuns. It shows us their life from the inside, not the outside.  (That the Sisters of Charity wear prim 19th-century style bonnets rather than flowing veils also reduces the glamour.) The movie (and play) is about a power struggle between a scary, old-fashioned sister who suspects a priest of molesting a student and the priest, who is friendly, modern, and, because we decide the nun is right, seriously creepy. Sister Aloysius can see evil because she is a savvy woman who has lost any youthful illusions. This bit of dialogue, which proceeds their confrontation over Father Flynn's relationship with the boy, illustrates an essential element in the lost glamour of nuns: distance.

Among the half dozen or so people who write seriously about glamour, my view that religious glamour is one of the phenomenon's important manifestations (reflected not only in ideas of vocation but also in much--though by no means all--religious art) is considered eccentric. But at least Mary Gordon is on my side. What do you think?

Posted by Virginia Postrel on December 27, 2008 in Film, Religion