The Glamour And Peril Of Getting Gifts

In a 1993 article in the American Economic Review, Wharton economist Joel Waldfogel estimated the “deadweight loss of Christmas,” arguing that “holiday gift-giving destroys between 10 percent and a third of the value of the gifts.” That loss is basically the difference between what givers pay to buy the gifts and what recipients would be willing to pay for the same items. Waldfogel has now developed his argument into an adorably packaged little book called Scroogenomics: Why You Shouldn't Buy Presents for the Holidays

. Here’s an excerpt from chapter one, which you can read in full here):

When the day arrives, families—and extended families—gather around a tree or a hearth or a menorah to exchange holiday gifts. Kids squeal in delight as they open their dolls and trucks. With young children especially, the gifts matter less than the ritual of ripping off wrapping paper and bows. Teenagers feign surprise—for grandma’s benefit—and register actual approval for the gifts they specifically requested. They roll their eyes at the music and movies you buy them. Because you’ve raised them well, they manage a smile for grandma’s gifts. What kid doesn’t need a candle? But the fabricated smiles aren’t limited to the teens. The adults all arrange their faces into expressions of pleasure as they unwrap items they would never buy for themselves. “A cribbage board? You shouldn’t have,” we tell our mothers-in-law. Indeed 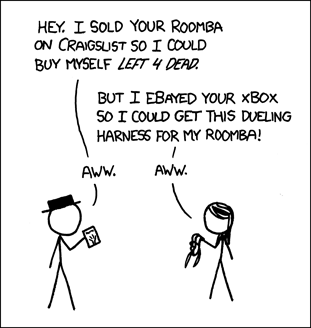 O. Henry’s The Gift of the Magi is a tale of another sort of deadweight loss. I’ve always hated it for the cruel joke the author plays on the characters, doubly so since he declares their gifts a model of wisdom rather than heartbreak. How can that outcome be good? Everyone is worse off! Even as a child, I thought a bit like an economist.

But O. Henry did perceive one thing correctly: that the characters’ gifts were at least proportionate to each other, and each was—and was perceived as—an expression of great love. Imagine how much worse it would have been for Della to have sold her hair only to receive an ordinary tin of tea in exchange. (Diet Coke hadn’t yet been invented).

Cash, the favored alternative of Scroogy economists, lacks the glamorous promise of perceptively fulfilling an unarticulated longing. (Scrooge, of course, did not give cash. He was too stingy.) It also lacks the license to enjoy yourself that comes with a gift chosen by someone else. Cash is fungible. You may use it for something routine or responsible rather than something fun.

But suppose you’ve said you want the cash for a particular purpose, to get something you want but couldn’t (or wouldn’t) buy without the presents. Your friends and family could chip in to fulfill your wish, and you’d feel at least a moral responsibility to use their gifts the way you said you would. It would be just like cash, but it would feel different: a little more sentimental, a little less crass. Plus instead of, say, four OK presents for $25 each, you could get one great $100 present. It might not be glamorous, but it could be fun—and a lot less disappointing than letting people guess.

That’s the idea behind Lottay (pronounced like the drink), a gift-giving site started by some of my husband’s former UCLA MBA students. Their biggest problem, as Professor Postrel warned them, is getting people used to the idea of giving, and asking for, cash. It’s a tough challenge, one they’re trying to solve by encouraging givers to specify what the cash is for (with the understanding that recipients can spend the money as they choose) and by using “e-greeting cards, private messages, images and pictures to wrap money in the emotion of the occasion.” For those who don’t find that approach convincing, they have a blog with a glamour-puncturing message: Hints Don’t Work.