The Future Is A Windmill

Sleek, pristine, and elegantly modern, the blades of an advanced windmill turn in an unseen wind. Windmills have become the glamorous new symbol of clean energy and, like a stylized atom or rocket ship in the 1950s, of a hopeful future made possible by technological progress. As far as I know they haven't yet shown up in upholstery textiles or restaurant decor (give it time), but images of windmills are everywhere in this season's ads, political and otherwise. Obama has them. McCain has them. Boone Pickens has them. GE has them. An ad promoting Minnesota in the new issue of Fortune has them. Bank of America ATMs have them, promoting paperless online banking. Even Turkish Honda Civic ads have them.

These images epitomize grace, one of the essential components of glamour. The blades appear to turn effortlessly, generating energy without waste. They look as autonomous as a bird in flight. Everyone, including me, leaves out the massive power lines required to carry the electricity some place where it will be useful. These are glamorized images. 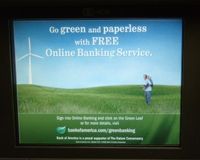 Like all glamour, these images create an illusion. The grubby details of wind energy aren't as pristine as the pictures. Generating and transmitting electricity is a complicated business, requiring unglamorous, behind-the-scenes labor and expertise--not to mention huge structures that the neighbors may not like. Even wind-energy promoter Boone Pickens admits that a wind farm isn't self-sufficient as a power source: "You've got to supplement it with a gas-fired or coal-fired source so whoever buys it gets continuous 24-7 generation."

Glamour is a "magic light" that distorts perceptions. Its allure depends on obscuring some details and heightening others. Experience and close examination tend to destroy glamour, often replacing it not with sober realism but something far more negative. Once disillusioned, the once-enchanted audience can become excessively cynical, unwilling to see anything good in what it once idealized. It's dangerous to depend too much on glamour. Just ask the nuclear power industry.