The Evolution Of The Glamorous Mom

As DeepGlamour’s newest mother (my son is two and a half), I do a lot of thinking about the way having a child has affected  my capacity for glamour – usually at the same time I’m worrying that my jeans are veering rapidly into “mom” territory. Like DG interviewee Maureen Kelly, I find myself paying close attention to the glamorous moms out there. 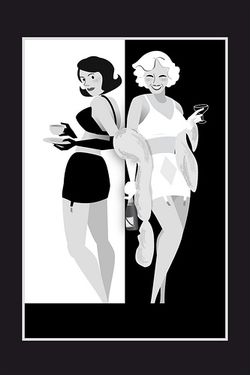 A while back, Virginia wrote about the original glamorous mom, Mary, full of serenity and grace. A generation ago, mothers like Jackie Kennedy captured the public’s imagination. Kennedy’s iconic beauty and elegance stood in sharp contrast to other glamorous female icons of the era, most noticeably, Marilyn Monroe (Mad Men

’s fictional ad wizards immortalized this difference in their proposed campaign for Playtex bras, asking ‘Are you a Jackie or a Marilyn?’).

With all of these ideals of glamorous motherhood, it’s difficult to choose one as best, though I do lean towards the modern mix. For me, having a child has sharpened the distinctions between real life and glamorous fantasy. Where in my pre-kid life, dressing up for dinner or a night out was a regular, run-of-the-mill event, these days, on the occasions I have to dress up, put on heels and makeup and something other than eau de Play-Doh, I’m especially conscious of how I look and feel. I lay it on a little thicker. My heels are getting higher and my perfume’s getting stronger – but my skirts are getting just a little bit longer, too.

Maybe that’s the luxury of being a modern mother – we get to be Jackie, but have our Marilyn, too.

[Image: Dyna Moe's depiction of the Jackie vs. Marilyn campaign. Used with permission.]

Posted by Kit Pollard on May 07, 2009 in History, Television, Appearance, Children