The Evolution Of Prom Fashion

Since last week, I've had the prom on my mind - so much that I went digging in my parents' photo albums for pictures of proms past. I came up with some interesting specimens, too. 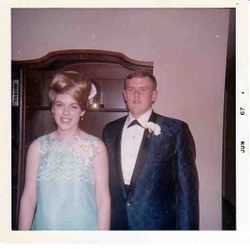 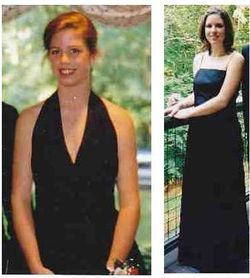 My sister and I aren't dressed so differently, despite the nine year gap between our dances (though at some point during that time, girls at our high school switched from short or knee-length cocktail dresses to floor-length gowns). But the difference between my mom's dress and ours is really remarkable.

"It seemed like a lot of other things stopped around then, too, like my classmates and I were at the tail end of something. We still listened to music from the sixties and seventies, but kids a few years younger than us, including my brothers, had their own music. And clothes, too. Through my senior year, I wore floral dresses that came to my shins, sometimes with a belt of fabric at the waist, sometimes with puffy sleeves, with a square neck or lace collar, or a corduroy Peter Pan collar."

Sittenfeld's heroine graduated from high school in 1994 - the year after I did - and I identified with that quote, even though I didn't dress quite as conservatively. It always seemed, though, like there was an enormous, generational gap between my sister and me in terms of fashion.

These photos, though, show what a real generational gap looks like. My mom might have been listening to the Beatles and Rolling Stones her senior year, just like I did, but she shuffled off to her prom in an irridescent, lacy shift (with a date wearing the best shiny tux jacket I've ever seen). My sister and I, on the other hand, wore sophisticated black dresses with dramatic lines in the back.

All three of us were dressed appropriately for our dances, in styles consistent with our friends and classmates. We share similar taste in clothes and we've got similar personalities. Under normal circumstances, we'd be likely to wear the same outfits. This makes me wonder, at what point during the 25 years between my mom's prom and mine did attitudes towards appropriate prom glamour shift? When did it become OK to stop looking like a little girl and start looking like a woman?