Donatello's David And The Blond Ideal

As this earlier post suggests, the ideal of blonde beauty wasn't invented in Hollywood. Good luck finding a brunette Virgin Mary or Venus in a Quattrocentro painting. (Mary Magdalene generally has red hair.) But until yesterday, I didn't know that the blond ideal extended to Donatello's David.

The bronze statue was recently restored and stands in the foreground of the photo to the right. The restoration process identified where the statue originally included gilding. In the museum, if you look very closely you can, in a few places, detect tiny traces of the original gilding. (What you see in the photo is reflected light.) The statue in the back is an exact copy of the original, with the gilding restored.
Here's a closer picture of those shiny gold locks. 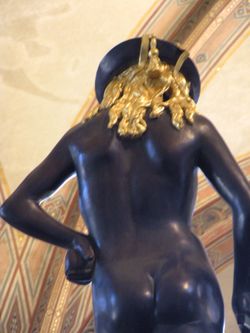 The two versions of the statue raise an interesting question about authenticity and copies. Nowadays, it's possible to make a perfect copy of a statue in bronze. So which is the more authentic version of the original? The one that looks the way Donatello intended the statue to look, or the one he actually worked on? As a matter of both modern taste (that gold is a bit much, at least under electric lights) and history, I prefer the original. But I also like seeing them together.