The Allure Of Change 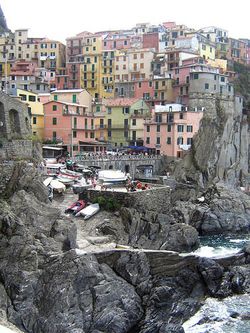 While picking up a few extras in Whole Foods I heard Fiona Apple's rendition of “Across the Universe.” In the store all I could understand of the text was John Lennon’s recurring refrain, “Nothing’s gonna change my world.” Hearing this focus on permanence brought to mind Greek philosopher Heraclitus’s contrasting saying, which focuses on change: “You can never step into the same river twice.” And, sure enough, the world soon changed for me in a small, annoying way when I stepped on some gum in the parking lot.

The village shown at left is Manarola, one of five villages that nestle in isolated coves along a small Mediterranean coastal region of Italy called Cinque Terre (Five Lands). The oldest villages date from around the 11th century, and the youngest from the late 12th century. The rocky cliffs rising from the sea are so rugged that the towns were isolated from each other, reachable only by sea or by strenuous treks over rugged terrain. To farm the steep hillsides, the residents built stone terraces, and in the process are said to have moved more tons of stone than were used to build the Great Wall of China. My wife and I hiked some of the coastal hiking trails, and to see the picturesque results of this labor is both humbling and ennobling. (See the photo below.)

The first modern connection to these towns was a railroad into the village of Vernazza in 1870. During World War II railroad tunnels and cliff-side paths were blasted, creating easy connections between all the villages. 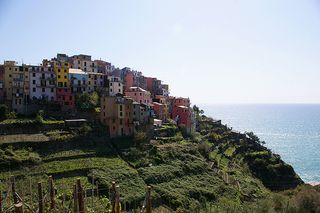 Today, for the modern tourist, despite becoming better known since the 1990s, it remains an area of incomparable charm, having been shielded from modern development for centuries.The region has been designated a World Heritage Site to help preserve its beauty. (WHS has some stunning photos.)

Now trains make several daily runs through the villages, and the region’s allure brings in many tourists from the outside world. And the desire to experience something different runs both ways. The allure of the outside world means that many young people from the region now commute to work in the city of Le Spezia. I wonder how many young people will choose the hard life of maintaining and farming the terraced hillsides.

Allure can work on a small scale as well. Once a path had been blasted into the seaside cliff, the former impassable barrier between the villages of Riomaggiore and Manarola became a leisurely twenty-minute walk. The path soon became known as the Via Dell'Amore (Lovers’ Walk). Think about the sense of mystery that having that path available must have created. “Could the man (or woman) of my dreams be waiting for me in the next village?” The locals say that making that short walk changed many lives.

Posted by Randall Shinn on August 10, 2009 in Mystery, Rhetoric, Travel