Glamour can sell religious devotion or military glory as surely as it can pitch lipstick or island vacations. All promise a way to transcend our everyday circumstances, to experience more and become better than ordinary life allows.  All invite us to imagine escape and transformation.
From Achilles and Alexander to "national greatness," the glamour of battle is remarkably persistent. So is  the glamour of martyrdom, as any trip through a Western museum or perusal of a Lives of the Saints (or its Protestant equivalent) will demonstrate. Nor is martyrdom's appeal to Christians merely historical, as Eliza Griswold reported in this 2007 TNR piece.

Glamour appeals to our desires, whatever they may be, and Jihadi glamour offers something for everyone: from historical importance to union with God, not to mention riches and beautiful women. Consider this excerpt on the glories of martyrdom from the Egyptian cleric Hazem Sallah Abu Isma'il (transcribed and translated by MEMRI, my ellipses, video here):

The [martyr] does not lose anything. He does not die. All of a sudden he ascends to the angels and lives next to Allah. He pleads on behalf of 70 of his family members....The Crown of Honor is placed on his head. The gem in this crown is more precious than the whole world. He is married off to 70 black-eyed virgins. If one of these virgins were to descend to this world, her light would extinguish the light of the sun and the moon. That's how beautiful she is.

It's a compelling vision. Of course, traditional martyrs--Muslim or Christian--don't deliberately blow up innocents (though religious wars are hard on civilians). 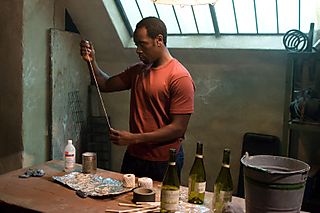 Watching the excellent new movie Traitor, I was struck by another aspect of terrorist glamour: how much it resembles, at least in fictional portrayals, the glamour of heist movies. (Don Cheadle is an explosives expert in both Traitor and the Ocean's 11 movies.) In both, you have a secret and intricate plan in which every team member is important and the goal is to outwit authorities and commit a crime. It's not hard to imagine how appealing that might be to a bored and impressionable person.

As Rushdie suggests, of course, glamour always leaves something out, in this case the literally gory details of the act (and I wouldn't bet on eternal life or crowns and virgins). And in most of its incarnations, glamour proves perishable. Either aspirations change, entropy and boredom set in, or the audience learns too much, destroying the mystery and grace on which glamour's beautiful illusion depends. The question for this September 11 is, How do we puncture the glamour of Jihadi terrorism? The first step is recognizing that such glamour exists.

Posted by Virginia Postrel on May 02, 2011 in Current Affairs, Propaganda, Religion