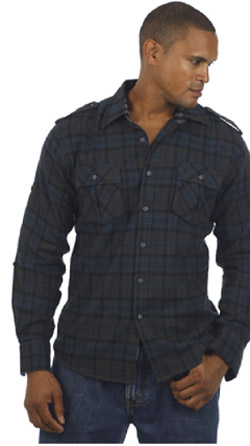 During recent trips to Santa Fe and Boulder I picked up some fun clothing items, including the 191 Unlimited shirt shown on the model at left. I had some interesting conversations with saleswomen, and more than one of them bemoaned her husband’s lack of interest in ever wearing stylish clothing. Their husbands always wore work clothes or very casual comfort clothes. One saleswoman and I agreed that some men and women seem uninterested in fashion, while others play it safe by wearing what most people around them are wearing. We both felt that developing a personal fashion sense is a slow, incremental process that involves some trial and error.

Any person hates to look foolish, but Carol Dweck’s mindset research at Stanford has shown that people who believe that abilities such as intelligence, musical talent, and athletic skills are unchangeable are the people who are most likely to avoid trying to master areas of endeavor that prove difficult for them. She has shown that children who have been praised because learning some subjects or skills seemed easy for them (“you’re so smart, gifted, or talented”) often absorb a darker side of that message which implies that if you have to work hard to master a particular subject or skill, it means that you have a permanent lack of aptitude in that area. So when some area proves difficult for these fixed mindset students to master quickly, they may feel that having to work hard at it makes them look inept, and they may then choose to avoid that subject as much as possible. In her research Dweck found, for example, that pre-med students with this fixed-ability mindset often changed majors when they encountered the first math or biology course that they had to work hard to pass.

On the other hand, children who have been praised for their hard work in learning various subjects and skills tend to believe that abilities can be developed incrementally, and they are usually far more willing to work hard to try to master subjects and skills that challenge them. They view making mistakes and learning from them as integral parts of the long-term process of growth. Dweck’s controlled studies have repeatedly shown that this incremental-growth mindset is far more likely to give students the grit needed to work hard and make it past various obstacles they encounter as they pursue their interests and goals.

I can understand that some people may have little interest in fashion, and others may not wish to differ in appearance from their peers. But I suspect that for some people, professing a lack of interest in fashion may  be a way to avoid giving others any opportunity to  judge them as trying and failing to be fashionable. One or two such failures may have already convinced them that they have little aptitude for fashion, and they assume that this will always be the case. And after dressing for years in an inconspicuous, blend-in way, trying something different might make the wearer too self-conscious to appear confident and comfortable.

For those whose mindset assumes that developing an ability is an incremental process, taking a fashion risk becomes a single step toward incrementally developing a personal fashion image. If some people suggest that your efforts on a particular occasion are partially flawed, you can deal with that. You realize that taking risks can lead to imperfect results, and if you decide that this effort didn’t work out as successfully as you had hoped, you assume that this one effort implies little or nothing about your long-term ability to develop an interesting personal sense of fashion. You move forward and try new possibilities.

For the first few years of elementary school one of my granddaughters, who loves animals, wore a tail to school and preferred mismatched socks. I thought this was fun, and I was proud that my daughter, a visual artist, was comfortable letting her daughter go to school dressed in an eccentric way. A gallery owner friend let her daughter choose to head off to the first day of kindergarten in full-length gloves. I don’t know what the fashion sense of either of these young girls will be as adults, but hopefully it will retain some measure of their childhood audacity.

[This PicApp Photo shows a model on the runway at the Davidelfin Spring 2011 fashion show during Mercedes-Benz Fashion Week at The Studio at Lincoln Center on September 16, 2010 in New York City. (Photo by Frazer Harrison/Getty Images for IMG). Content © 2010 Getty Images All rights reserved.]

Posted by Randall Shinn on September 20, 2010 in Fashion, Appearance