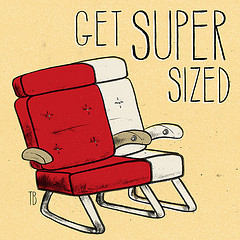 On a recent Southwest Airlines flight to Oakland on a tall, obese man sat down next to me. He was not morbidly obese—he could squeeze into his seat with both arm rests in place—but he did overlap his seat enough that I realized that I would have difficulty avoiding contact with him. I had gotten up early that morning, so I crossed my arms, moved as far as I could toward my wife’s seat, and managed to sleep most of the flight. Near the end of the flight my obese neighbor raised the armrest between us to get more comfortable. But he courteously took care to avoid imposing on my space any more than his bulk forced him to.

As humans we desire a certain amount of personal space, and on many occasions we will wait for the next elevator rather than crowd into a tightly-packed group of strangers. Having someone stand too close to us can feel like a form of intimidation, no matter what the person’s size. I can remember three occasions in which short, petite women made me uncomfortable by standing too close to me during casual conversations. In one case it was a colleague’s wife, and it was impossible to look down at her without being distracted by the cleavage being displayed by her provocatively low-cut dress. A petite woman once confessed to me that she sometimes liked to intimidate large women by standing very close to them. She was aware that being close to her tiny, svelte figure sometimes made larger women feel awkward and huge.

If we feel that someone is invading our personal space in an uncomfortable way, we instinctly try to move away from them. On an airplane our ability to move is limited, and the growing obesity rate means that we are increasingly likely to find ourselves sharing seating space with individuals who are too large for a single seat. Film director Kevin Smith created publicity for himself by berating Southwest for denying him a seat on one of their flights. He claimed that he could have fit into a seat with the armrests down, but as I learned on the flight to Oakland, this does not guarantee that the passenger’s bulk will not spill over onto the adjacent seat. 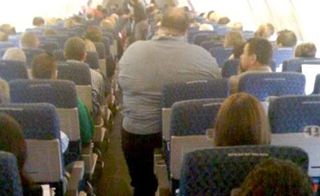 If the situation is extreme (as illustrated by this photo taken of a unresolved boarding situation), being pinned under the weight of another person can prove injurious. In 2002, after being pinned to the outside wall during an 11-hour Virgin Airlines flight by a grossly overweight woman, another woman passenger required hospitalization. Angered what she felt was the airline’s calloused attitude toward her ordeal, the squashed woman threatened to sue, and won a £12,000 settlement. During the investigation into the incident, the airline discovered that the obese woman’s thin husband had booked himself into the row behind his wife, which suggested that he was fully aware that sitting next to her on a long flight would be an ordeal.

Given the rising rates of obesity around the world, unless airlines find ways to deal with grossly overweight passengers (such as the purchase of an extra seat), both the obese passengers and their thinner neighbors are increasingly likely to find themselves in uncomfortable social situations. The thought that you might find yourself on a long international flight seated next to a stranger whose bulk spills onto your seat is a distinctly unglamorous image.

Posted by Randall Shinn on October 26, 2010 in Transportation, Aviation, Travel