Seeing Yourself From A Thin Perspective 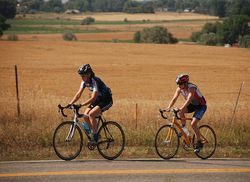 Any American city of 100,000 or more will have some people who are obese and some who are underweight. But I find living in a city where obesity is relatively uncommon to be quite a different experience. During a recent trip to Phoenix and Tucson, I saw more obese people in four days than I would likely see in six months in Fort Collins. (And Arizona cities are not among the most obese.) In a large book store in Tucson, almost half the employees struck me as obese or nearly so. In contrast, I couldn’t ever remember seeing obese employees in retail stores in Fort Collins. At a restaurant in Tucson I was stunned by the obesity of the patrons at one table. Compared to what I have become used to seeing, some of them seemed grotesque. Yet there were diners at other tables who were just as obese. I have never seen a similar situation in a Fort Collins restaurant.

A recent study found that high school girls judge their weight relative to their peer group, and I think adults do the same. We assume that the people around us provide a more realistic perspective on normal weight than do tall, thin models in magazines. So if you are overweight and hang out with other overweight people, you may feel that your weight is reasonably normal. But in a city where most people are relatively fit, this feeling is hard to sustain. If you are seriously overweight and shop in downtown Fort Collins or Boulder, you will look fat compared to most people around you. 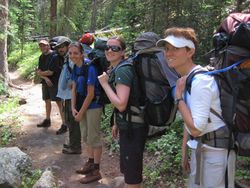 This creates pressure to stay fit. Among our close friends, everyone does something to exercise, as well as putting some some effort into maintaining a healthy diet. Several of our friends work with personal trainers or take classes in Yoga, Pilates, or Tai Chi. All of them engage in some outdoor activities, from gardening and walking to running, bicycling, and cross-country skiing.

Does everyone in these cities work hard at fitness? Of course not. But a high percentage of them do regularly engage in physical activity. Knowing this makes it harder to make excuses for not exercising, especially when some your neighbors are amazingly fit. In my case a woman two houses down has climbed all 54 of Colorado's 14,000+ mountains. And a woman in her late sixties at the end of the block still runs marathons at 5000' elevations.

[Photo of two women on a Sunday ride in Boulder County by Let Ideas Compete. The photo of the group backpacking the Estes Park back country west of Loveland is by akeg. Both photos used under the Flickr Creative Common's license.]

Posted by Randall Shinn on March 23, 2010 in Fashion, Appearance