Retouching And The Photo In The Mind’s Eye 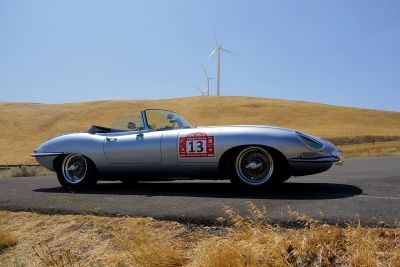 Car blogger Chuck Goolsbee posts some great photos under the heading “Car Photo of the Day.” The one above, featuring two of the world's most glamorous artifacts, is a particular favorite of mine. I’ll return to it in a moment. 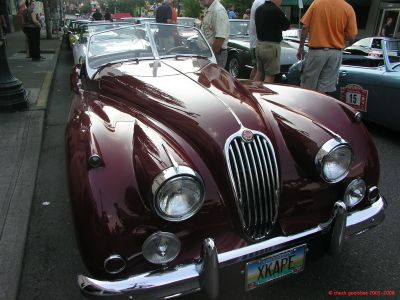 In a post last month, Chuck contrasted two photos of the same car. The first is the kind of snapshot-as-note-taking that I shoot all the time. Since it’s mostly to jog the memory, the composition doesn’t matter much. Hence, the headless car buffs, with particular emphasis on the guy in the orange polo shirt and shorts. 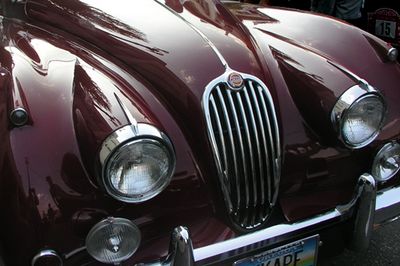 The second shot, a photo within the photo, is this closeup of the Jaguar. “This is the photo in my minds-eye whenever I see an XK,” Chuck wrote. “That luscious bonnet and fenders, with all those light-capturing curves.”

Since cropping was the only manipulation required to produce the second photo from the first, few documentary purists would object. Recreating the photo held in memory didn’t require retouching the mechanical reproduction of the scene, only focusing closely on one piece of it.

But go back to the photo of the E-type Jaguar and the windmills (click the photo or here for a larger view). Simply by recording a still image, the scene has been glamorized, portraying the car and windmills as autonomous icons of technological grace—no maintenance or transmission lines required. At the same time, however, the photo calls attention to distractions that would have gone unnoticed in person: the rough asphalt in the foreground and the fence interfering with the car’s lines in the middle distance.

A glamorized version of the photo would remove or downplay these distractions, focusing the scene on its emotionally meaningful components. Profiled in The New Yorker, Pascal Dangin, today’s leading retoucher of fashion photos, called blemishes and flaws “anomalies,” suggesting that they distract from the truth. A retouched scene would be literally false. But would it be more emotionally truthful?

One possibility would be to clean up the photo by cropping it, producing something like this. 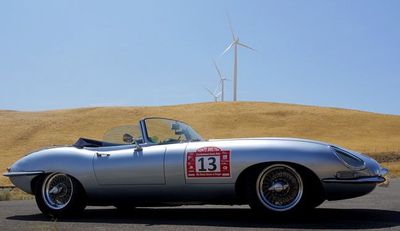 There are fewer distractions now, but the photo seems cramped, with less sense of movement and the open road. Cropping may be journalistically legitimate, but it's emotionally unsatisfying.

Having read this interesting post in which photographer Mark Harmel discussed the sort of minor retouching he does to clean up distractions, I asked him what he would do with the Jaguar and windmills photo. He sent back this subtly altered version of the photo. 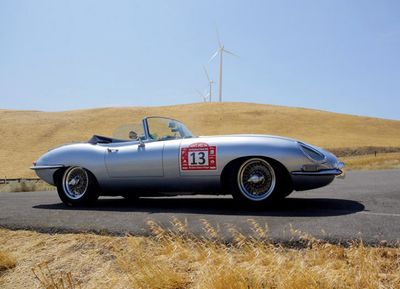 “The wide angle lens stretched the car out—especially in the front end,” he wrote. “I compressed it and cleaned up the grass some. I compare my style of retouching to wearing those Bose Noise-Canceling headphones. My job is to remove the visual distractions. In this photo I also cleaned up the grass some to fill in a hole. I might actually do more so there is that fluffy seed-top runs all the way across.”

The side of the road is less distracting, though the grass is now a bit too regular. And by correcting the car's front end, he made the photo more realistic—but less glamorous.

“Bring out the best, conceal the worst, and leave something to the imagination,” was George Hurrell's formula for creating glamorous portraits. That prescription runs contrary to journalistic full disclosure. It also acknowledges the selection involved in all creative presentations. Neither an article nor a photograph reproduces the world in all its continuity and complexity. Ultimately, the correct selection depends on the creator's purposes and the audience's expectations.

So which version of the car and windmills photo do you like best? Or can you do better?

Posted by Virginia Postrel on September 28, 2009 in Automobiles, Photography, Grace