Remember When Halloween Was Scary? 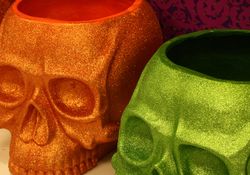 I barely do. These days, it's all "sexy" costumes for the ladies and decidedly un-sexy, not-even-funny joke costumes for the guys. And on the decorating front, instead of ghoulish graveyards or even dark and mysterious haunted houses, those of us trying to deck out our houses for the holiday get...glitter.

The glitter is everywhere. A stroll down the Halloween decoration aisle at Target turns up sparkly skull candy dishes, sparkly jack-o-lanterns, sparkly skeletons. Oh, there are a few more traditional foam gravestones and "the witch is in" signs, but they fade to the background. It's hard to see around the glare coming off the glittery pumpkins.

For this phenomenon, I blame Stephenie Meyer

and her band of chaste, "vegetarian" vampires who, instead of burning up in the sun, sparkle like a fleet of immortals dressed for a night out at Studio 54.*

The sparkle is just one more way that vampires - who used to be a genuinely scary staple of the Halloween season - have been softened. Last year on Slate, Grady Hendrix wrote a great summary of the evolution of the vampire from bloodthirsty killer to emo virgin.

And as go the vampires, so goes all of Halloween. It's been mostly a kids' holiday for a long time and fairly sanitized in the U.S. for decades, but it used to have a tiny bit of edge. Covering everything in sparkly paint smoothes that right out.

The sparklefication of Halloween is not a surprise, though - it's mostly a matter of supply and demand. With Twilight moms holding a whole lot of purchasing power, it's only natural that the glitter goods would fly off the shelves. I can't blame product designers and stores for delivering what the people want.

But that doesn't mean I can't mourn the passing of the genuinely scary haunted house, or hope that one day we will see it's return, alongside vampires who do a little more than gaze longingly at their human prey.

*To head off the Twilight defenders: I read all of the books and I've seen the movies and I liked them. They entertained me. But I still think it sucks (pardon the pun) that Twilight vampires have overtaken all others in pop culture. There's a little variety out there, but not much, and pop fiction would be a better place if Edward Cullen had a little more diverse company. And Halloween decorating would be easier if everything didn't shed glitter on my kitchen floor.