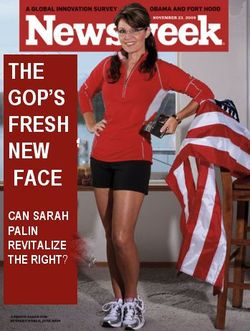 I am generally bored by the hysteria, pro and con, that surrounds Sarah Palin. As a bona fide coastal elitist intellectual snob, I can’t see voting for her. But neither do I share the visceral hatred for her or her fans. (Megan McArdle dubs it Palinoia.) I consider her intelligent but ignorant and unworldly. I even liked her convention speech.

That said, the flap over the Newsweek cover shot is as ridiculous as it is predictable. I’ve read enough comment threads over the years to know that conservatives regularly make a point of proudly declaring that their female icons are good looking compared to the old hags on the other side. When did they suddenly adopt politically correct second-wave feminist attitudes toward female beauty, even in the public sphere?

Like it or not, Sarah Palin’s good looks are a big part of her superwoman appeal: governor, earth mother, and sportswoman, with a pretty face and a great body despite all those pregnancies. Besides, I seem to recall some widely circulated topless beach shots of the current commander-in-chief. (Not to mention Condi Rice strutting in those great black boots.) There’s no double standard, except for the one that says if you have bad legs, we don't want to see you in shorts.

There are, of course, problems with the photo, which was taken for Runner's World and was supposed to be embargoed for a year. Nonetheless, it’s clear what Newsweek editors were thinking when they picked it: This is going to sell magazines. (The controversy is a bonus. Free publicity!) Journalism is in survival mode. This is not a time to get squeamish about using the most commercial photo available.

The cries that the cover is “sexist” assume two things: First, that women in public life should not be portrayed as consciously, proudly, sexily attractive. Male politicians can be obviously good looking, but conspicuously attractive women aren’t sufficiently serious. (Maybe we’ll make an exception if you look sufficiently high-end WASP.) And, second, that Newsweek doesn’t like Sarah Palin—an assumption borne out by its cover headline. With different editorial framing, the photo would be read differently. (Pardon my bad mockup. I only had PowerPoint and a very balky iPhoto retouch function to work with.)

I do have one question: Is she wearing panty hose?

Posted by Virginia Postrel on November 19, 2009 in Magazines, Politics, Appearance