Political Glamour: Why Mitt Romney May Be Handsome, But He Isn't Glamorous 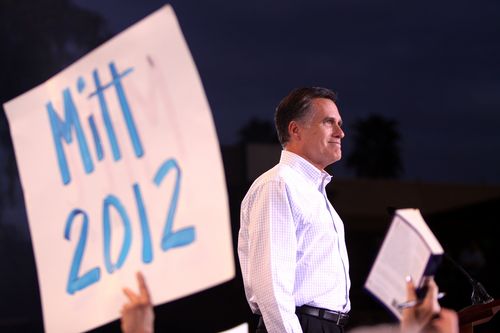 I've often written and spoken about the power of Barack Obama's glamour in the 2008 campaign and how glamour is a great help to a candidate but can actually make governing more difficult.

So, my friend and occasional DG contributor David Bernstein asks, What about Mitt Romney? He is, Dave points out, a "presidential candidate who looks like he was sent from central casting," with a "young photogenic energetic VP candidate who performs extreme exercise program (who's matched against graying hair-implanted gaffe prone old guy)." He might also have mentioned that Romney even made People's 2002 "Most Beautiful People" list. That sounds like a prescription for glamour.

But, at least in a politician, it isn't enough. To quote from my forthcoming book (which, before a significant reorganization at the publisher, was called The Power of Glamour and scheduled to be published September 3, 2013--stay tuned for updates):

Glamour is not the same as beauty, stylishness, luxury, sex appeal, or celebrity. Glamour is, rather, a form of nonverbal rhetoric, which moves and persuades not through words but through images. Glamour takes our inchoate longings and focuses them. By binding image and desire, glamour gives us pleasure, even as it heightens our yearning. It makes us feel that the life we dream of exists, and to desire it even more. We recognize glamour by its emotional effect—a sense of projection and longing—and by the elements from which that effect arises: mystery, grace, and the promise of escape and transformation. The effect and the elements together define what glamour is.

Most of us would like to be or be with physically attractive people. So beautiful people who make their beauty seem effortless, and who maintain enough distance and mystery, can be glamorous. Their beauty makes us long to inhabit the world they represent--to be like, or be with, them.

Mitt Romney is good-looking, but he does not have that effect on most of his supporters. Barack Obama in 2008 did, not because he's good-looking--that's necessary, but not sufficient--but because his persona tapped people's deep longings for the country.

Unlike movie stars and models, whose professions encourage audience projection and allow them to take on multiple personas, politicians belong to a specific realm of life. Although most presidential nominees are physically attractive and many are charismatic, only very rarely are they glamorous. It's too hard to maintain the requisite mystery and grace and, as President Obama has discovered in office, to represent the disparate and idealized yearnings of millions of different supporters.

Posted by Virginia Postrel on November 05, 2012 in Current Affairs, Politics