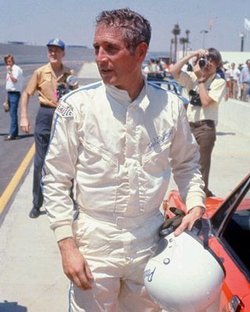 David Thompson, writing in the Guardian, argues that the late Paul Newman was best in those roles that expressed his own ambivalence about the movies. Playing  Fast Eddie Felson in The Hustler, Newman got an Oscar nomination

The film was done with grit and no glamour, as well as a lot of hard-learned pool, and Felson was a knife to scrape away Newman's jammy smile.

But Thompson tries too hard to convince us that Newman was immune to glamour and its trappings, writing:

He was absurdly popular as a young man, and then waited or endured until that had worn off, and he could face all the abiding tests of honesty without glamour or celebrity to divert him.

Newman was never more honest than when driving Indy cars, and open wheel racing is about a glamorous as it gets.  He was 70 when he won at Daytona.  Lime Rock Park owner Skip Barber said of him:

He liked to win. He thought of himself as an uncoordinated guy, a stumbler a little bit, but in a car he was really graceful. 'Graceful' is not a word that a lot of people associate with car racing, but there sure are guys that are more fluid and smoother than others, and he was good.