In the contemporary U.S., we tend to think of our age as hyperpartisan--all that vitriol flowing from the blue team onto the red team and back again. You can't even eat fried chicken sandwiches, buy out-of-stock china patterns, shop at Whole Foods, watch HBO, or read Vogue without making a political statement. Just mulling the political implications of American Apparel leggings has occupied many a column inch. Can't you just enjoy yourself?

That is, it turns out, an old question.

The English essayist Joseph Addison asked it in 1711 after a frustrating night at the opera, when all the pretty ladies seemed to have politics on their mind. Instead of congregating in the front--the better to put on a show for their male admirers--they arrayed themselves according to partisan allegiances: Whigs on the right, Tories on the left, and a dwindling number of "neutrals" in the middle. 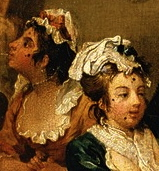 The ladies' left-right symbolism (reversing today's left and right just as Americans reverse the European conventions of blue and red) didn't stop with seating charts. It extended to artificial beauty marks, like the ones Hogarth depicted on prostitutes in Marriage à la Mode (top) and A Rake's Progress (above), which were the height of fashion. The patches began as a way to cover the effects of smallpox or syphillis, but eventually became simply a style--with political meaning. Whigs patched on the right, Tories on the left.

Writing in his infuential daily newspaper The Spectator, Addison mocked this partisan patching, noting that the intersection of style and symbolism could create confusion.

whatever may be the Motives of a few fantastical Coquets, who do not Patch for the Publick Good so much as for their own private Advantage, it is certain, that there are several Women of Honour who patch out of Principle, and with an Eye to the Interest of their Country. Nay, I am informed that some of them adhere so stedfastly to their Party, and are so far from sacrificing their Zeal for the Publick to their Passion for any particular Person, that in a late Draught of Marriage-Articles a Lady has stipulated with her Husband, That, whatever his Opinions are, she shall be at liberty to Patch on which Side she pleases.

I must here take notice, that Rosalinda, a famous Whig Partizan, has most unfortunately a very beautiful Mole on the Tory Part of her Forehead; which being very conspicuous, has occasioned many Mistakes, and given an Handle to her Enemies to misrepresent her Face, as tho' it had Revolted from the Whig Interest. But, whatever this natural Patch may seem to intimate, it is well known that her Notions of Government are still the same. This unlucky Mole, however, has mis-led several Coxcombs; and like the hanging out of false Colours, made some of them converse with Rosalinda in what they thought the Spirit of her Party, when on a sudden she has given them an unexpected Fire, that has sunk them all at once. If Rosalinda is unfortunate in her Mole, Nigranilla is as unhappy in a Pimple, which forces her, against her Inclinations, to Patch on the Whig Side.

Like the self-professed vegetarian who turned out for Chick-fil-A Appreciation Day, some former critics converted to patching once it was turned to partisan use. Wrote Addison, "I am told that many virtuous Matrons, who formerly have been taught to believe that this artificial Spotting of the Face was unlawful, are now reconciled by a Zeal for their Cause, to what they could not be prompted by a Concern for their Beauty."

Style is not glamour, however, nor vice versa. The real glamour in this story is what Addison sought at the theater: an escape from partisanship into a world of beauty.

Posted by Virginia Postrel on November 05, 2012 in History, Politics, Appearance