Naomi Wolf And The Phenomenology Of Angelina Jolie

Unlike Junod’s earlier piece, Wolf’s article on Jolie is not a standard celebrity profile. There is no interview, no encounter between the author and the object of her affection. Jolie remains an ideal, and the article is explicitly about the “life narrative” Jolie has “crafted,” the “persona that [took] her to global icon.” It declares itself an essay about artifice and image. What makes the piece so compelling is Wolf's palpable yearning to believe.  In the guise of analyzing Jolie’s image, she succumbs, forgetting that glamour is an illusion. 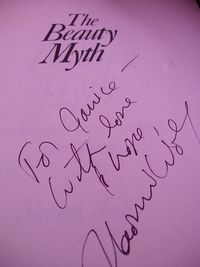 Certainly she never reminds herself, or her readers, how much Jolie’s life depends on unusual gifts and extraordinary wealth, and she never addresses the tradeoffs involved in living with all those tabloid headlines. Instead, Angelina Jolie's life functions as proof that the desires that inform Wolf's own oeuvre are all attainable: to be effortlessly beautiful and thin (The Beauty Myth

), to participate in high-level public debates (Fire with Fire), to indulge sexual desire without condemnation or consequence (Promiscuities), to become a mother without hassle or pain (Misconceptions

).
Most revealing is the way Wolf, a divorced mother of two, projects her own desires onto Jolie’s (short-lived) status as single mom. She completely ignores the standard tabloid narrative, an anti-feminist storyline casting Jolie as the womanly mother figure against Jennifer Aniston, the careerist punished for her insufficiently feminine ambition. Instead, Wolf reads Jolie’s story as the triumph of the Single Mom as Ideal.

Then there is the plane. Women are so used to being dependent on others (certainly on men) for where they go, metaphorically, and how they get there. Flying a private plane is the classic metaphor for choosing your own direction; usually, that is a guy thing to do, yet there was Jolie, with her aviator glasses on, taking flying lessons so she could blow the mind of her four-year-old son. That is the ultimate in single-mom chic: Even before she had reconstructed a nuclear (or postnuclear) family with a dad at the head of it, she was reframing single motherhood from a state of lack or insufficiency to a glamorous, unfettered lifestyle choice. Paradoxically, having done so, she makes the choice of a man to help her raise her kids seem like one option among many for a self-directed woman rather than either a completion of a woman or a capitulation.

This much-mocked paragraph takes aviator glamour — which is, in fact, a long-standing element of Jolie’s appeal (see the magnificent photos Annie Leibovitz did for Vogue) — and turns it into a story about what Naomi Wolf wants. A plane becomes a symbol not of general human freedom, mastery, and escape but of “single-mom chic.” Jolie rescues the aviatrix archetype from the inconveniently married-and-childless Amelia Earhart. (In the same issue, Bazaar does feature 12 pages of Earhart-inspired fashion photography by Peter Lindbergh.) And Wolf rescues Jolie’s kick-ass physicality, including the real-life flying and motorcycle riding, from its action-movie appeal to men. 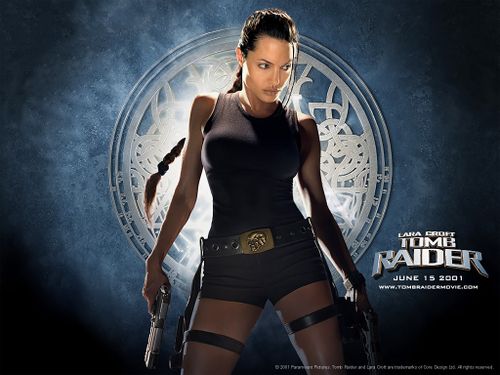 “Jolie’s image is not just a mirror of one woman but also a looking glass for female fantasy life writ large,” Wolf concludes her article. Glamour is most powerful when it encompasses multiple longings, in this case, not “female fantasy life” but “females’ fantasy lives,” both universal and particular. That Wolf can project so many of her own yearnings onto Jolie demonstrates why the actress is such an icon.
The mirror is an inapt metaphor, however. A mirror reflects an accurate (if reversed) image of reality, while glamour always presents a blurred picture, concealing much of the truth. The yearning audience is thus allowed to fill in the details. As Jezebel’s Sadie Stein sagely notes, despite Jolie’s  tabloid omnipresence her glamour depends on mystery.

Brangelina are totally enigmatic; we don’t know anything about them except the Harlequin-worthy synopsis. People like them because they can project whatever they want onto them. Maybe moms fantasize about Angie reading to her kids at night, then having hot sex with Brad. Those who want to turn their lives around probably are inspired by this scion of movie star and model who’s fearlessly pursued a course of growing up. Doubtless somebody somewhere has taken up flying as a result. Hopefully a few have turned to good works. (Ideally no one, anywhere, will allow Angelina Jolie to have any impact on her decision to adopt or not.) Some woman involved with a married dude may stay with him that much longer because of her tabloid happy-ending. Some people will see The Last Kiss and think it’s profound. And Naomi Wolf will look at Angelina Jolie and project her own fantasies: a feminist icon whom women love because they think the right way.

Glamour is an objective illusion, but it reveals subjective truths. The Harper’s Bazaar profile may tell us nothing true about Angelina Jolie, but it’s an x-ray into the soul of Naomi Wolf.

Welcome Instapundit and James Wolcott readers: Please visit our main page for more great posts, contests, and information on subscribing to our feed and email list.