Does This Barbie Make Me Look Fat? 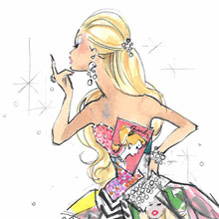 Happy birthday, Barbie! The hot, plastic blonde has turned 50 and was feted with her own fashion show at NY Fashion Week. (It took me a minute or two, but I do believe that is a real human model in the link's photo, not a giant Barbie doll. Uncanny, though!)

Ah yes, but if you watched the vid of the fashion show and thought, those dresses are great but Barbie was much more buxom than the runway models, maybe you need to be introduced to the newest Barbie... Dallas Cowboy Cheerleader Barbie.

The cheerleader has smaller bosoms, skinnier legs, a more vapid stare (perhaps hunger?), and hip bones that portrude from her frame. In other words--she's just like a real model! AT LAST!

Unfortunately, the wet rags over at Commercial Free Childhood don't agree. They have given the   new Barbie their TOADY award saying: 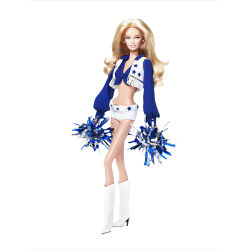 to focus on their appearance, to aspire to an eating-disordered body, and to play at being sexy before they’re even capable of understanding what sexy means."

Look guys, I think we all need to see the silver lining on this new cheerleader Barbie. A) She's obviously overcome a lot of physical limitations to be able to stand--let alone dance!-- on those bird legs, so good for her! and B) she's somehow still got energy even after the tape worm has ravaged her once hourglass figure. Poor girl. She's obviously in the special needs category, let's leave her alone.

"In collaboration with the Dallas Cowboys cheerleaders, Mattel created a Barbie Doll that makes standard Barbie look like a clerk at Wal-Mart. Complete with toothpick legs and shorts that don’t qualify as shorts on several levels, Cowboy cheerleader Barbie will surely inspire thousands – perhaps millions – of little girls to vomit their cafeteria pizza so they’re still sexy in their P.E. shorts." 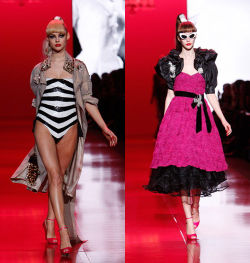