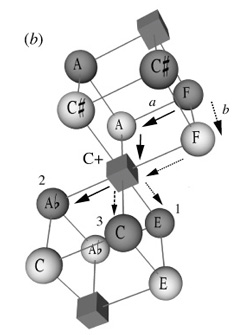 Dmitri Tymoczko, a composer and theorist who teaches at Princeton, recently published a book titled A Geometry of Music

. The book includes some remarkable geometric models (such as the one shown at right) which he uses to argue that despite various stylistic differences, there are enough commonalities in Western tonal music from the late Middle Ages to the present to consider it an “extended common practice.”

Tymoczko himself assumes that anyone who reads his book will already be able to read music and have studied music theory. And without that background his book would be impossible to follow. Interestingly, he recognizes that there is gap between our widespread ability to enjoy music, and the arcane intricacies of music notation and theory. Early in his book he writes:

I find it useful here to consider the analogy with magic. A stage magician uses various tricks to cause the audience to have extraordinary experiences—bunnies seem to disappear, beautiful assistants seem to be sawed in half, and so on. Enjoying a magic trick does not require you to understand how the tricks are done; in fact, understanding may actually diminish your astonishment. Nor is the magician’s “ideal audience” composed of professional magicians: the point is to perform the trick for people who will genuinely be fooled. In much the same way, I understand composition to be a process of using technical musical tools to ensure that audiences have certain kinds of extraordinary experiences. When composing, I make various choices about chords, scales, rhythm, and instrumentation to create feelings of tension, relaxation, terror, and ecstasy, to recall earlier moments in the piece or anticipate later events. But I do not expect listeners to be consciously tracking these choices.

Tymoczko goes on to suggest that consciously trying to track these choices may interfere with falling under the spell of the illusion, just as knowing too much about how a glamorous illusion has been achieved might weaken the illusion. Tymoczko writes that listeners who do try to track the specific means by which the illusions are achieved “are like professional magicians watching each others’ routines—at best, engaged in a different sort of appreciation, and at worst too intellectually engaged to enjoy the music as deeply as they might.”

Another mathematically gifted composer named Milton Babbitt taught at Princeton before Tymoczko, but his attitude was almost the opposite. In contrast to Tymoczko’s interest in listeners who are not “professionals,” Babbitt famously wrote that he didn’t expect laypeople to enjoy his complex music, saying that it was written for a specialist musical community analogous to the specialist community of professional mathematicians.

Tymoczko notes that it was not until the 20th century that some composers (such as Babbitt) began using musical materials in ways that they realized that most listeners find “off-putting.” Geoffrey Miller, in his book The Mating Mind, points out that such a strategy can be an effective way of generating an “elite aesthetic.” Miller writes that elites “often try to distinguish themselves from the common run of humanity by replacing natural human tastes with artfully contrived preferences.” Thus if the vast majority of people around the world prefer consonant sound combinations, then working primarily with dissonant combination is one possible way to separate your work from “common” tastes.

In contrast, Tymoczko asserts that the “traditional strategy—writing immediately attractive music that also contains deeper levels of structure—is as potent as it ever was.” Not surprisingly, composers following the traditional strategy have often been relatively close-mouthed about their techniques. After all, if one of your intents is create works that might cause non-professional audiences to have extraordinary, spell-binding experiences, why would you risk diluting that experience with cold-blooded discussions of esoteric techniques? In contrast, composers keen on impressing other specialists have often taken an active part in pointing out the intricacies of their technical innovations.

Like Tymoczko, I prefer that creative artists, like magicians, use their technical tools to help audiences have extraordinary experiences, and then maintain some measure of mystery about how they managed to fashion their magic spells. Let some sense of magic remain. If I want to know more about their techniques, I can always buy and study the score. But when I attend a performance, I am hoping to be beguiled.

[Other examples from Tumoczko’s book can be found at www.oup.com/us/ageometryofmusic.]

Posted by Randall Shinn on December 22, 2011 in Books, Mystery, Music