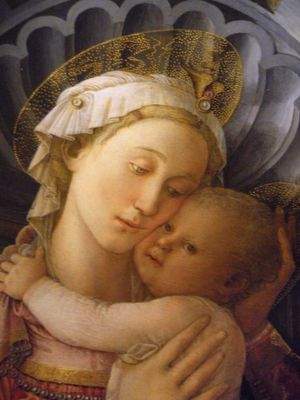 In 431 the church declared the Holy Virgin the Mother of God, thus sanctioning the cult of Mary. Her popularity became staggering. In France alone more than a hundred churches and eighty cathedrals were raised in the name of Notre Dame, Our Lady, including the cathedrals of Paris, Chartres, Reims, and Amiens.

To counter the massive illiteracy of the Dark Ages, in the 6th century Pope Gregory the Great overruled the commandment forbidding the making of idols, declaring that "Painting can do for the illiterate what writing does for those who can read." To fill churches, cathedrals, and private chapels, hundreds of sculptures, frescoes, and paintings were commissioned of the Madonna and child. Many of these images are remarkably beautiful, typically showing us a serene young mother holding her clear-eyed young son. Images of Mary and her son became so widespread that when people had spiritual visions in this period, they most often saw the Virgin Mary.

Images of the Virgin Mother presented the church's two desired states for fertile women: either chaste virgins or married women bearing children. Celibacy was much championed in the Middle Ages. The church encouraged young women to remain permanently chaste by becoming a nun. The cult of courtly love that arose in France praised young women who remained unattainable, who steadfastly resisted the pleas of their wooers.

Unmarried women who failed to remain virginal until married were regarded as loose, immoral, and even sexually aggressive. Men supposedly feared that such seductresses would tempt them like the Biblical Salome, but many were fascinated by the ancient femme fatale archetype. 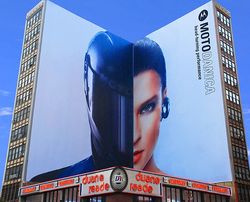 Hard and fast categories like virgin, mother, or immoral seductress are of little use to most contemporary women, and in modern culture images abound of women in multiple and varied roles. We see images of women as doctors, lawyers, writers, mothers, athletes, business owners, models, police officers, fire fighters, and fighter pilots.

One striking advertising image shows Danica Patrick's face split into the roles of race car driver and glamorous woman. In one case a helmet completely masks her identity--she seems a mysterious black knight. In the other case hairstyle and makeup create another kind of mask--she seems an unstoppable seductress. Neither image is false, but neither represents ordinary reality. Both are stylized, artful portrayals of a woman who has been successful as both a race car driver and model. Contemporary women can choose to play multiple and varied roles, and most no longer rely on patriarchal authorities in choosing which roles to pursue. For an individual woman, balancing the multiple roles that interest her can sometimes become one of the challenges of modern life.

Posted by Randall Shinn on April 06, 2009 in Photography, Art, Religion