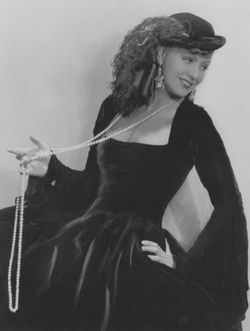 This rare photo of Greta Garbo smiling belongs to the Pancho Barnes Trust Estate Archive, maintained by DG friend Louis D'Elia. It was taken by the great Hollywood portrait photographer George Hurrell in his one and only session with Garbo--a shoot to promote her 1930 film Romance.

Garbo did not like the antics Hurrell used to get his subjects to relax and look natural, and refused to work with him again. (Clarence Sinclair Bull became her photographer of choice.) But she did crack a smile when Hurrell tripped over some equipment, and he managed to capture the moment. 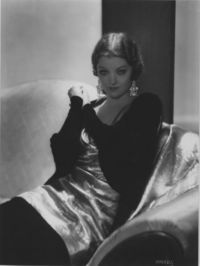 I examined the photos from this shoot when I wrote a catalog essay for a 2006 exhibit of Hurrell photos from the Pancho Barnes collection. (A version of that essay later appeared in The Atlantic.) While working on the essay, I noticed that the earrings in the Garbo photos reappeared in one of my favorite Hurrell portraits, this one of the woman Hurrell himself considered his "most mysterious" subject: Myrna Loy.

Remembered today mostly as the comedienne star of the Thin Man movies, for many years Loy was cast as an "exotic," thanks to her almond eyes. (For an amazing collection of Myrna Loy photos, from many phases of her career, check out this blog.) Like Garbo, she was an MGM star when Hurrell was the studio's chief portrait photographer.

As I've mentioned in my posts and article about the Debbie Reynolds collection auction, while MGM created lavish costumes, it also recycled them. The same was true, of course, of accessories, and here's the photographic evidence. As always, click the photo to see a larger version.

[Photographs by George Hurrell © Pancho Barnes Trust Estate Archive and used with permission. Do not copy them to your own site.]

Posted by Virginia Postrel on June 26, 2011 in Film, Photography