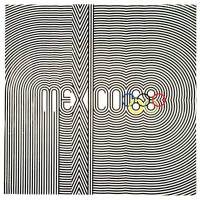 Daniel Hernandez, who's living in Mexico while  writing a book, alerts us to design greatness: the 1968 Mexico City Olympics.  The Museum of Modern Art there is hosting an exhibit on the design and graphics, and Hernandez writes:

The exhibit is a look at the extraordinary task the organizers had of convincing the world through the power of graphic design that Mexico was capable of hosting the '68 Games -- the first held in Latin America, the first held in a developing country, and first held in the Spanish-speaking world.

The Op-Art logo, which also referenced Huichol design,  grew out of the  entire design team effort.  Graphic artist Ed Fladung points out the contributions of Lance Wyman, who was responsible for the graphics.  Wyman says

It was designed by integrating the official five ring Olympic symbol into the number 68 to create a parallel ine typography that suggested imagery found in Mexican preHispanic art and Mexican folk art. The logotype powerfully expressed a sense of place and culture and visually exclaimed the Games were in Mexico.

That  sophisticated, abstract graphic identity was repeated by signage, publications, posters, tickets costumes  and even the torch.

Today, we're  accustomed to omnipresent corporate branding, and ignore it  as visual noise.  The Mexico '68 logo reminds us to respond to an exciting design.

Posted by KateC on August 28, 2008 in Museum Exhibitions, Sports