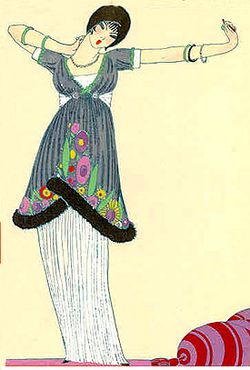 In a 1912 New York Times article bylined Margaine Lacroix, the designer who only four years earlier had shocked Paris with her sexy dresses opined on the question, "Do Women Like Eccentric Clothes?" She argued that they do not. "Now, as ever, the woman of society does not wear bizarre clothes," she wrote.

You will say, are not the great Parisian houses, or at any rate a number of them, turning out numbers of extraordinary eccentricity? You are quite right. They are. And to that I can only reply that those models are created but not worn...

[T]he eccentric models one sees belong to the same order of things as those strange and beautiful birds one hears about in tropical countries. Glittering and beautiful with all the colors of the rainbow they die in a day or, in other words, they are exported. Then, stripped of their peculiarly bewildering eccentrities, they are modified to form the new fashion.

These daring gowns suggest new ideas, evoke new fashions, but in their entirety no woman of good taste accepts them. If an actress wears them, perhaps, occasionally, she does so only on the stage. I speak, of course, of the actresses who stand high, not of those aspirants to fame who do not care how they are remarked if only they are noticed.

Sounds like many a contemporary runway show, not to mention the Grammys.

Margaine Lacroix worked within--and celebrated--the then-fashionable curvy silhouette. "Would it be rational to suppose that women would cover up that hard-earned grace with eccentriticies that could not show it to advantage," she wrote. "In short, the silhouette--that is what women want to-day, and they put it above all else, certainly far above the bizarre."

Although his name never appears, the essay is clearly an attack on Paul Poiret, whose designs that year included his lampshade dress, this waistless, "rectilinear" dress, and this concoction made from what look like left-over curtains. She disliked "the rage for color combinations," another Poiret trope, prefering white. And she definitely wasn't a fan of the hobble skirt:

Are we in our narrow skirts less free than our grandmothers in crinoline? Unless we stupidly exaggerate the skirt we are indeed much freer, and exaggeration, as I have said, the woman of taste avoids scrupulously.

In short, the women of taste in general do not care for the bizarre, and if caprice drives some of them to it they quickly weary and come back to the rule that a lady does not like to be stared at.

Poiret's eccentricity and flamboyance gave him a place in fashion history, eclipsing the once-famous Margaine Lacroix. But it was Coco Chanel, with a simplicity that would have been strange to both of them, who sensed where fashion and culture were really headed.

Posted by Virginia Postrel on March 13, 2013 in Fashion, History