MadMen Contest: Where Were The Secretaries? 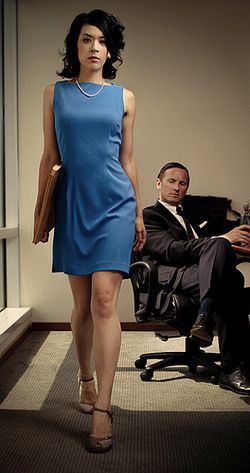 Banana Republic sponsored a photo competition for people dressed in the style of the TV show MadMen. The prize is a walk-on role for an episode of the show, and the semifinalists and now the winner have been announced. Among the semifinalist photos we see portraits of wives and airline stewardesses, but secretaries (now titled “administrative assistants”) and interns seem underrepresented.

In imagining a walk-on role, a temporary secretary or someone interviewing to be an intern would seem to have great potential. Such a walk-on role could be little or no dialogue, and a lovely young woman could provide eye candy for the show’s viewers. Surely a lot of contestants felt this would be the case and submitted photos of themselves as secretaries. One of these is shown at right.

An attractive, unattached female is inevitably the focus of considerable male attention in an office, even if it is limited to looking and fantasizing. The image at right captures such a moment marvelously. The woman who is the subject of her boss’s admiring appraisal no doubt realizes that he will study her figure as she walks away, and she accepts it, though from her expression we can’t tell whether she welcomes it or not.

Back before issues of sexual harassment made office relationships more hazardous, secretaries were often involved in affairs with their bosses or other men in the office. So I find it surprising that photos of secretaries didn’t turn up in the semi-finalists. However, the semi-finalists and winners were determined by public voting, which always make the outcome of a contest unpredictable.  A long-standing issue for the TV show Dancing with the Stars has been how its predominately female viewers vote. After the first few seasons the producers feared that no woman contestant would ever win because so many women viewers seemed to simply vote for the man they would most like to have as their dance partner. 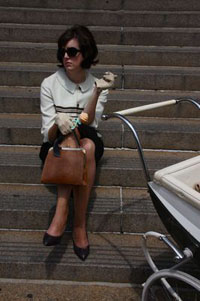 The winning MadMen photo is shown at left, and an interview with winner Porter Hovey can be found here. Hovey is a freelance photographer, and she and her sister staged the photo. She portrays a well-dressed suburban mom, sunglasses and all, who is sitting on the steps next to her vintage stroller. One of the questions her interviewer asks is whether she sees herself as a Marilyn or a Jackie, though there doesn’t seem much doubt which one she emulates in the photo.

Contests in which the winner is whoever crosses the line first are easy to understand. The same with sports like basketball where points are scored when the ball goes through the hoop, and the team with the most points wins.

Contests involving subjective judgments are often puzzling. Looking at the photos of the men who are semi-finalists, only the first had a suggestion of narrative. The rest seem like straightforward photos—no feeling of story. Some of the women’s photos are more interesting in a narrative sense, particularly the first, the last, and the winner. In these, the women are seen in staged action. Surely that made a difference in how voters were able to relate to photos.

Perhaps the majority of voters in this contest were women, and if so I can imagine them relating to a wife with responsibilities who is forced to wait for someone, perhaps her late-as-usual husband. A scene like this invites us to imagine what the story is. The photo looks like it could be a genuine street shot, and people were actually stopping and peeking in to see the baby (which turned out to be camera gear).

It would be interesting to know the demographics of the voters. Did women vote for images of women that they identified with? Returning to the lack of secretary photos among the semifinalists, were women voters  less inclined to vote for images of women who look as if they might put a married man’s fidelity to the test? I didn’t vote, but as a male I confess that I understood why the man in the first photo was mesmerized.

[Photo of the woman in blue is from Suchacyn’s Flicker Photostream, and is used by permission.]